close
Recently, Dane Cook and George Lopez have taken digs at the ad campaigns for their latest films.

Stars Strike Back Against Ad Campaigns

Dane Cook is a fan of his latest film, My Best Friend's Girl, and he considers it to be the "best/funniest film" he has made.

Unfortunately, he doesn't share the same love for the film's poster.

In a MySpace entry Cook posted this past Wednesday, the actor/comedian spent a paragraph praising Girl before jumping into a point-by-point analysis of why he doesn't like the poster.

Among Cook's complaints are, "The left side of my face seems to be melting off of my skull. I guess I am looking directly into the Ark of the Covenant?" and "My character apparently has fallen in love with a strand of Kate Hudsons hair. Kate's mannequin is desperately in love with the inside of my right ear while Jason is half stunned, half corsage." 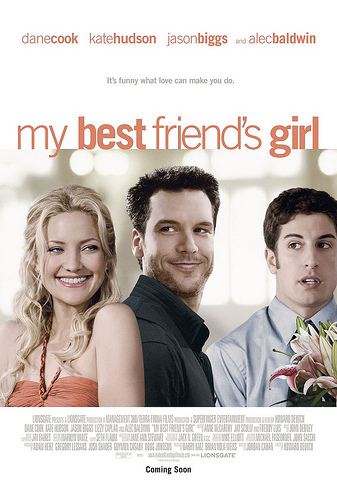 Girl hits theatres September 19th, when it will go up against Neil LaBute's Lakeview Terrace which stars Samuel L. Jackson and Patrick Wilson as well as Ghost Town with Ricky Gervais, Greg Kinnear and Tea Leoni. Since none of those films have blockbuster written all over them, it's safe to say that it will be a competitive weekend and Cook's comments probably won't help Girl 's case.

George Lopez recently walked the same road as Cook when he took a dig at the trailer for Beverly Hills Chihuahua.

Unlike Girl, Chihuahua should face little opposition from the other films that open with it on October 3rd. Nick and Norah's Playlist, How to Lose Friends and Alienate People and What Just Happened? all skew toward adult audiences.

It's only competition may be reluctant parents.