Sex addiction. Underground fight clubs. Jet crashes. These are just some of the topics that populate the world of best-selling author Chuck Palahniuk.

Yet until now, the only time that any of his blistering works of fiction have made it to theatres was in 1999 with David Fincher's Fight Club. While Club only grossed $37 million domestically during its theatrical run, it has since gathered a considerable cult following and many consider it to be one of the best films of the 90's.

Now, with Choke, writer/director Clark Gregg has taken a shot at translating Palahniuk's crazed world to the bigscreen.

Gregg, who is making his directorial debut with Choke, was given the blessing of Palahniuk as he tweaked the screenplay over a nearly two-year period. The author told Gregg simply, "‘Don’t be too faithful, don’t stick to the book."

Still Gregg didn't feel as though he took Palahniuk's story, which is about (are you ready for this?) a sex addict who milks sympathy out of strangers by pretending to choke and then cons them into giving him money so he can support his deranged, dying mother, into totally new territory.

"I actually felt like I was not so much trying to take it a direction, but rather finding the best and truest movie within the book ... Now that's not saying that someone else might not look at it and see a completely different movie in the book," said Gregg. 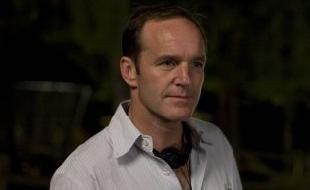 While Gregg has tried his hand at writing before with 2000's blockbuster thriller What Lies Beneath, most of his film career has been spent in front of the camera working with such great directors as David Mamet ( The Spanish Prisoner, State and Main and Spartan ), Paul Thomas Anderson ( Magnolia ) and most recently with Jon Favreau on Iron Man. As a result, he's picked up some lessons about directing along the way.

"I definitely tried to soak up what they all do," said Gregg, "While it would be hard to pinpoint what exactly I took away, I know that Dave Mamet makes his sets a really fun place to be. You kind of can't wait to get to work because you know you're going to laugh a lot and have a good time. I definitely tried to do that."

Of course, giving direction to the likes of Sam Rockwell, Anjelica Huston and Kelly Macdonald ( No Country for Old Men ), also gave Gregg some great lessons in acting.

"I learned a lot from watching the other actors that I had there. You know, to see the different ways that Anjelica Huston works versus how Sam Rockwell works and how Kelly Macdonald works, each of them had something where I sat back and said, 'Wow! I should be doing that. I want to try that.'”

While Gregg would eventually like to direct his own original material, he has met with Palahniuk to discuss which of the author's other novels he may adapt next.

“I really want to do another book of Chuck’s. I think he’s got a kind of singular vision, and his books make great movies,” said Gregg.

As if often the case, actors try their hand at directing before ultimately choosing to stay in front of the camera. Gregg is not one of them.

“I loved it more than I could have imagined. And I'm going to fight really hard to get another shot at doing it."