close
BOXOFFICE was able to catch up with Robert De Niro to discuss his two latest films, What Just Happened? and Righteous Kill.

on September 03, 2008 by denirointerview.jpg
Print

He has been labeled as a legendary perfectionist who has a confirmed belief that there is an inextricable link between life and art. Robert De Niro, 65, has emerged as one of the great screen actors of his generation, a two-time Oscar winner with such landmark films as Mean Streets, Taxi Driver, The Deer Hunter and Raging Bull and he has successfully gone behind the camera. De Niro has always been notoriously reticent about his private life. Although part Irish,
Italian, German, Dutch, French and English, he has stated that he identifies "more with my Italian side than with my other parts." Perhaps that¹s why he was so relaxed recently, playing up the role of the family man.

When Robert De Niro strides out with his family in tow he seems a changed individual. Gone are the monosyllabic replies, replaced by a flowing conversation. Dispatched are the tight-faced grimaces and in
their stead smiles and a twinkling eyes. Physically the shoulders are flat and relaxed rather hunched ­and the general body language appears, dare I say it, friendly.

We meet at a festival in Karlovy Vary, a spa town two hours drive from Prague in the Czech Republic where the organizers have decided to honour him with a retrospective and a career achievement award. It is the antithesis of the rituals of glitz events like Cannes and Venice and very egalitarian. Students invade the sedate environs, camp out under the stars or sleep in school gymnasia and overdose on films for ten days.

Perhaps the atmosphere and lack of pressure could also account for De Niro's chilled out demeanor. He is accompanied by his wife Grace Hightower, a former flight attendant with whom he has been together for 11 years. Their son Elliot, 10, plus his 13-year-old twin sons, Julian and Aaron, the progeny of his relationship with ex-model and actress Toukie Smith have come along for the ride. Where else could they swim unnoticed outdoors in the Olympic-size swimming pool of the Thermal Hotel, half-way up a wooded hill, or eat unmolested at local restaurants where De Niro insisted on choosing local produce (hearty helpings of knedliky or boiled sliced dumplings and roast pork with cabbage) and the local liqueur Becherovka, a bitter-sweet, yellow herbal drink.

Woody Allen once said he and De Niro both knew how to make people keep a respectful distance. "You move fast and keep your head down. People don't bother you when you're busy." On the other hand, De Niro is perfectly friendly with genuine fans and happily signs autographs for the crowds lining up for his advertised appearances.

He believes that as you get older, the more complicated things get.

"It's almost therapeutic to be doing simple things with kids," he suggests. There has been no shortage of such opportunities. He also has a step-daughter Drena and son Raphael with first wife actress Dianne Abbott. Raphael, a former actor, now works in New York real estate. His current domestic bliss dates from 2004 when he re-married Hightower at their estate near Marbletown in upstate New York. They had parted acrimoniously after he had an affair but decided to get back together again. The family's main abode is in Manhattan.

They're all staying in the faded opulence of the Grand Hotel Pupp (a historic edifice dating back to 1701) where De Niro holds court. So why is it that he has managed to acquire this reputation as a "difficult" actor? He mulls over the question in his usual thoughtful manner then answers: "You can have integrity and not necessarily be difficult. As a director I don't like it when an actor is temperamental. Everybody has got their own personal craziness but when you do a movie everyone should leave any personal problems at home.
You know, it's difficult enough to make a movie as it is ­you do not need any extra drama to get it into the can. Basically you just need to show up, speak your lines and earn your paycheck and leave the
ego behind."

Despite such deprecation of his art, De Niro frequently contributes much more than the basics. On his latest film What Just Happened?, a Hollywood satire directed by Barry Levinson, he was one of the producers. It has had a checkered career so far opening at the Sundance Film Festival in January, then selection as the closing film at the Cannes Film Festival in May and now Karlovy Vary. The budget
was some $25 million dollars and such stars as Sean Penn and Bruce Willis contribute amusing cameos surrounding De Niro playing an aging producer trying to save his career. Although it has hardly been an
unbridled success with the critics and even had difficulty getting a release, De Niro defends it: "There is nothing wrong with it and in retrospect I don't think there are any bits that we could take out or reconfigure. Barry [Levinson] was trying to work out certain things and it was always a kind of work in progress."

So is Hollywood really as ruthless as it is portrayed in the satire? A knowing smirk plays around his lips before he says: "It¹s just like any other business. The rules are no different in that world. But it's more visible because it's Hollywood. People do what they have to do. And if you can't get something done because it boils down to economics, you have to do something else: Somebody falls by the way-side in that situation." 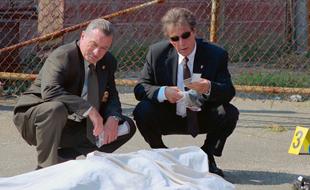 De Niro returns to a more familiar beat opposite Al Pacino in the crime thriller Righteous Kill. He and Pacino previously worked together in 1995 in Heat, and their brief scenes were memorable. The new thriller was a project De Niro pushed to get made. "It was something that came along and I mentioned it to Al and he was interested," De Niro says. "In Heat, we only had one scene together, which is my favorite scene in the movie; I thought it was well written and was a great scene to watch, so I wanted to build on that." They play two veteran New York City detectives who work to identify the possible connection between a recent murder and a case they believe they solved years ago. Is there a serial killer on the loose, and did they perhaps put the wrong person behind bars?

Away from making movies, De Niro has emerged as rather a film festival connoisseur who set up his own Tribeca Film Festival as part of a plan to regenerate the downtown area of the city in the aftermath of 9/11.
It has rapidly acquired a reputation as a serious and exciting date on the crowded calendar.

"I left a meeting right after they hit the World Trade Center. I went to my apartment, which looks south, and I watched it out of my window. I could see the line of fire across the North Tower. I had my binoculars and a video camera - though I didn't want to video it. I saw a few people jump. Then I saw the South Tower go. It was so un-real, I had to confirm it by immediately looking at the television screen. CNN was on. That was the only way to make it real. Like my son said, it was like watching the moon fall."

The actor recently decided to quit his long-time agency Creative Artists Agency (CAA) which resulted in a vindictive email from one of the staff, berating De Niro for having too good an opinion of his own worth and box office appeal and being ungrateful for the roles that CAA had put his way in such box office hits as Analyze This or Meet the Parents. The email also pointed that De Niro was over the hill as far as the younger generation of film-goers was concerned. Rather than get shirty or sulky as he might have done in the past he replies simply: "There are certain facts about it that are just inaccurate. I
don't know what to say. I hate to think the email came from someone at CAA, because I felt it was beneath them. It's like an obscene telephone call. You just don't know where it comes from."

Did he ever suffer from feelings of rejection when he was starting out as a jobbing actor desperate for work? "I didn't have a problem with rejection, because when you go into an audition, you're rejected already. There are hundreds of other actors. You're behind the eight ball when you go in there. At this point in my career, I don't have to deal with audition rejections. So I get my rejection from other things. My children can make me feel rejected. They can humble you pretty quick"

De Niro relishes the new horizons that have opened up to him on the other side of the camera. He says: "I like directing. With The Good Shepherd it took me years to get things going. I would have done it earlier. I started nine or ten years ago and it really took that long to get it going. I'd like to do a couple of other films. A next episode of The Good Shepherd, which goes from 1961 with the Berlin Wall going up to 1989, with the Wall coming down. Then I'd like to do a third film from 1989 to the present. I'd like to make it a trilogy.

"It was a complicated project because it was owned by certain people and it had to be reworked. Then I had to get the actors. I was thinking of Leonardo DiCaprio, but when I started the search he was too young to approach. Then years later he was going off to do The Departed with Marty [Martin Scorsese] and I couldn't stop the momentum at that point. So then I approached Matt Damon. I had another actor who also was wonderful but I couldn't get the movie made with just him in it, because it was an ambitious project. I needed someone like Leo or Matt with star power just to get the financing."

He would love to work with Scorsese again and the pair have a couple of projects under wraps. "Yes, we have one project in particular that we want to do. We've done eight movies together and I'd like to do
another couple with him, at the very least. We're going to do this project in a year or two. I'm superstitious about talking about it, but it's supposed to be happening. Marty listens. He's open to unexpected things on that - this is a flowery way of saying it - on that voyage. He takes ideas, and he's not afraid to try them."

Trying to pin down De Niro about the art of his craft makes him become decidedly elusive. "Ultimately, acting is what you make of it and how smart you are in your choices. An actor like Matt Damon is very
conscientious and works very, very hard but I don't know what his formal training was. Whatever works for you ... everybody comes at it from a different position."

De Niro's nature means that he rarely has regrets. There is one, however, that still bugs him. "When a parent dies, it's the end. I always wanted to chronicle the family history with my mother. She was always
interested in that. I wanted some researchers I'd worked with to talk to my mother, but she was a little antsy about it. I know she would've gotten into it. It would have been OK with my father, too. But I wasn't forceful, and I didn't make it happen. That's one regret I have. I didn't get as much family history as I could have for the kids."