When your casting in a potential fantasy film franchise is contingent on demonstrating that you have the requisite romantic chemistry with the actress playing the lead, it’s probably a good sign if you wind up making out with her on the director’s bed.

"I turned up for the screen test with Kristen Stewart at Catherine Hardwicke’s house prepared to do two scenes,” recalled Robert Pattinson. “We did those, but then Catherine decided to try a scene where I try and kiss Bella for the first time and almost kill her. I had only just that day met Kristen, so trying to do that scene on the director’s bed was kind of a bizarre circumstance.”

Indeed, nothing in the career of the 22-year-old English actor, not even playing the ill-fated Cedric Diggory in the adaptation of the equally beloved book Harry Potter and the Goblet of Fire had prepared him for the experience of starring in the silver-screen version of Twilight.

“I think that there is no real way to prepare for that,” said Pattinson, reached by email while on location in Europe. “It is a very odd experience, though, knowing you are playing characters who already have a fan base who in turn have their own notions of how the character should be portrayed before you even start working.”

Certainly none of the principals involved in the production, including director Hardwicke and Pattinson’s co-star Stewart, were prepared for the way in which the popularity of Stephenie Meyer’s series about the unlikely love between a human girl and a vampire boy was set to increase exponentially over the course of filming the adaptation of the first of her four novels.

Soon enough, though, Stewart started “seeing Twilight everywhere.” But she and Pattinson agreed that, while it was important to stay true to the way their characters were written by Meyer, they couldn’t afford to fret beforehand about the fact that million of fans had pre-existing pictures of their characters in their minds. 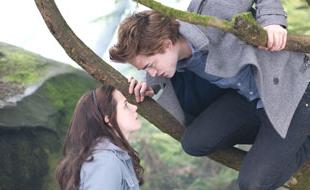 “When we started shooting, as far as I knew, we had a sort of cult movie with an insanely dedicated fan group,” Stewart said. “It only became intimidating once we were well into shooting and I was already set on how Bella would be played. People would talk about the ‘crazy’ fans, and I would just keep my head down.”

Pattinson, for his part, was a bit intimidated by the initial negative responses to his casting on some of the hundreds of fansites devoted to Twilight.

“A little,” he admitted, “as I was enthusiastic about doing the job and worried that it might have got me fired. After the first few months, though, your concern for it dissipates because you have thousands of other, more immediate concerns once you start shooting.”

Hardwicke counts herself among the fans of the series, who sometimes split themselves into two camps, “Team Edward” and “Team Jacob,” depending whether they want Bella to end up with the vampiric Cullen or her other suitor, the werewolf Jacob Black (Taylor Lautner).

“Before we started filming, I was more Team Jacob, but then as I got into it  I of course, like everybody else, fell under Rob’s spell,” Hardwicke told B OXOFFICE before making a telltale correction: “Under Edward’s spell, I mean.”

And Hardwicke wasn’t the only “Twilighter” whose mind started to change as soon as she caught a glimpse of Pattinsons’ performance. Posts on fansites became increasingly supportive, sometimes fanatically so.

It is a performance informed by, among other things, the reading of a book that dedicated Twilighters are dying to get their hands on—Meyer’s as-yet-unpublished retelling of the events in Twilight from Edward’s point of view, tentatively titled Midnight Sun.

“Edward in Twilight is such an enigma of a character because the story is told from Bella’s perspective, and she knows so little about him for the majority of the book. She just feels an emotional bond with him,” Pattinson said. “I had spent a long time developing his characterization before I read Midnight Sun  but it was nice reading it because it did back up a lot of my ideas as to how I wanted to play him.”

As an actor, Pattinson found that there was lot to sink his teeth into.

“The major thing I liked about Edward, what made him unusual to me, was trying to imagine how someone would act after spending 70 years harnessing and repressing your emotions and then having that control wrenched away from you and to suddenly feel everything again. He is essentially born again in Twilight after meeting Bella.

“The pain and confusion, and so many other emotions, that this entails was interesting for me to play,” said Pattinson.

But it isn’t the emotions on one side that so intrigue Twilighters so much as the entire relationship between Bella and Edward, who is torn between his desire to love and protect her and his sometimes overwhelming desire to  well, eat her.

“I think the combination of it being a relationship that is so specific to the two protagonists that you can almost guarantee it won’t break down and the fact that there is a possibility that they can both stay young, beautiful and almost carefree with each other for eternity,” said Pattinson. “And that there is always the possibility that the boyfriend will kill the girlfriend, which keeps a relationship fresh and exciting, as everyone knows.”

This article appears in the November 2008 issue of B OXOFFICE Magazine which you can read here .