on October 02, 2008 by petersollettnickandnorah.jpg
Print

Peter Sollett's feature debut, Raising Victor Vargas, was a Sundance fave and an indie hit, but now with his second feature, Nick and Norah's Infinite Playlist, he seems poised for more mainstream success. A charming coming of age comedy/love story with a terrific indie-rock soundtrack and a couple of rising stars, including Superbad 's Michael Cera, NANIP takes place over the course of one long eventful night and features lots of real New York City locations; in many ways it's practically a valentine to Manhattan (frankly, you'll never look at the ladies room at the Port Authority Bus Terminal in the same way again).

Turns out Sollett had a least one favorite place to film -- with the ghost of Jimi Hendrix lurking.

"It was pretty amazing to shoot in Electric Lady Studio," he said. "It's just so rich in music history it was a privilege being there. But the thing is that [cinematographer] Tom Richmond and I wanted to make New York look realistic; we didn't want to whitewash things in the way that sometimes movies do. So I wanted it to be representative of my experience there, which is that it's both rough around the edges and romantic. The gay burlesque sequence we shot at a place called The Box which is a burlesque club on Christie Street, and they really do shows like that...they actually do stuff that's in R or X-rated territory but we got it for a PG-13 film."

One of the film's funniest running gags involves Michael Cera's car -- a barely functional Yugo that's the butt of numerous jokes. Turns out Yugos -- which haven't been sold in this country since 1991 -- are almost as hard to find as Deloreans.

"I remeber the day we went to the movie car rental guy," Sollett laughed. "And he told us that he had at one point eight of them. But apparently, and I don't why this is true, that in the most recent Die Hard movie they blew up six or seven of them;I don't know why they wanted to that. So that basically left us with one. But then we found one in Brooklyn that didn 't run but we could tow it. And we used it for closeups"

Casting is a key element in a comedy, and some folks -- myself included -- think that Ari Graynor, who plays co-star Kat Denning's drunken but sweet best friend, nearly steals the picture.

"I agree, totally," Sollett said. "The thing about Ari is that people haven't really seen her before. Michael obviously people are knowing and loving, and Kat has been in some movies that have had wide release so they're familiar with here. But Ari seems to come out of nowhere in the film as this sort of comic virtuoso. We were really lucky to get her." Another casting coup is a brief but extremely funny cameo by Eddie Kaye Thomas as an extremely tall Jesus. "I knew Eddie through Paul and Chris Weitz [ NANIP 's producers, who also did the American Pie movies]," Stollett said. "And it turns out that he was close to Ari. When we realized that we hadn't yet cast Jesus, Eddie and I made it clear that we really wanted to do that together." 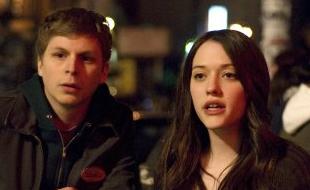 In a film whose story centers a grail-like search for a favorite band's secret club show, with the lead character's mix-tapes a crucial plot point as well, obviously getting the right music on the soundtrack was crucial. NANIP features music by contemporary faves like Vampire Weekend, Band of Horses, and Devendra Banhart, but we wondered if there were any songs Sollett wanted but couldn't get.

"Not really," he said. "I basically had a privileged ride with the music. Everything I wanted in there is in there, thanks to [music supervisor] Linda Cohen. There were, however, a couple of songs that I thought might work well in the movie that I couldn't find a spot for. There's a song by a band called Tacks, The Boy Disaster called "Forget Me Not" that I wanted to use, but I couldn't find a place. But everybody let us use their stuff, thank god."