close
BOXOFFICE sat down with Zooey Deschanel and Lou Taylor Pucci to discuss their indie film, The Go-Getter.

Meeting Zooey Deschanel and Lou Taylor Pucci to promote their new film The Go-Getter did not in any way qualify as a typical celebrity/journalist sit down.

Much like a scene from about a million indie films, the interview was set up in the middle of a restaurant which provided a background noise to the proceedings. On top of that, the constant schedule shuffles and fan interruptions during the interview itself made for an interesting afternoon. 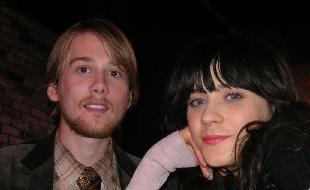 After sitting down with the duo, Pucci made the most of an awkward situation by cracking jokes and breaking the ice. “This is the best part. The photo shoots and all that crap. Not for me. I love the interviews, whether I know what to say or not 'cuz I usually don’t.” After making his theatrical debut in Thumbsucker, Pucci has enjoyed success in films such as Fast Food Nation, Southland Tales and Fanboys. His latest film, The Go-Getter, puts him in the lead role of an aimless slacker who takes a road trip in a stolen car to reunite with his long-lost brother after his mother dies.

The owner of the stolen car is played by versatile actress Zooey Deschanel. She most recently co-starred in The Happening this summer but and she boasts a versatile list of credits that includes Elf, Almost Famous and The Hitchhiker’s Guide to the Galaxy. Aside from acting she is also passionate about the filmmaking process as she described during our interview one of the things she looks for in a director to feel secure. “They need to be like a host. They need to make actors feel comfortable and feel like you can take risks. Because that‘s what acting is about”

Pucci continued the conversation by mentioning that actors truly want to feel comfortable when they’re on a film set. Every project is a new environment for them and to be able to adapt so frequently to a new situation can be a little disconcerting. “I just have a few questions now that I definitely ask. Like how are you with improv? How are you with changing lines? How are you with making stuff up on the spot? How flexible are you going to be? Rehearsal is the big one for me. But it’s so hard to find people who know how to do a rehearsal right. I’ve been on a few that don’t know what to do in a rehearsal and you just sit there like what’s going on?”

Deschanel adds that even a smooth set doesn’t always guarantee success when it comes to the final product, “I’ve seen movies where everything seems like it’s going to be awesome and I think I knocked it out of the park and then you’re like, oh yikes.”

Deschanel has also balanced her film career with television work, most recently doing a guest spot on the Showtime series Weeds. The way she describes it, the balance between the big and small screen leaves no room for error. “It’s a machine. On a TV set, you’re already going into an environment they’ve already created. My sister’s on a TV show and she works constantly. It’s like clockwork.

As far as continuing her work in features, Deschanel believes the best way to do it is to keep balancing out independent roles with big-budget movies. The Hollywood paydays allow her to make the gritty indie choices even if the environment is more laid back. “Big budget films have more time to make their date and have more people who care about your hair and stuff.”

The Go-Getter is now available on DVD.