In 1995, director John Lasseter revolutionized animation with Pixar Animation Studio's Toy Story. This weekend, he plans to do it again with the release of Bolt, the first Disney cartoon to be conceived in 3D. Now the Chief Creative Officer of both Pixar and Disney, Lasseter has the momentum to move the industry in the direction he thinks is smartest and he's firmly thrown his weight behind 3D technology, announcing that from Bolt onward, all of Disney's computer-animated films will be in 3D.

"I love 3D," says Lasseter. He's not kidding: Even the photos from his 1988 wedding to wife Nancy were in 3D. The next year, Lasseter directed the 3D short Knick Knack only to find that no theaters were equipped to project it. Times have evolved and now Bolt, an appealing story about a dog (voiced by John Travolta) who thinks he's a super hero, will open in 3D in over 900 theaters.

As Lasseter's first project with Disney after executing producing Ratatouille, WALL-E, and The Incredibles, the pressure was on to make something great. 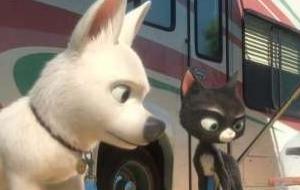 "The whole studio rallied," Bolt writer-director Chris Williams told B OXOFFICE. "People worked through their lunches, their dinners, because they sensed they could make something really special." The film's animators earned six patents developing new technological advances, particularly in layering brush strokes over the digital animation. "We wanted to give it a painterly feel," adds Williams.

Adding rustic detail to cutting edge animation is a contradiction that gets at the core of Bolt 's intentions. "The whole thing is about what's real and what's fake," explains Williams. Even the 3D is largely restrained with the goal of submerging the audience in the film. "It's meant to enhance without being distracting," says Williams, "People say that it's an immersive world."

"We're very conscious of using 3D as a story-telling tool," co-director Byron Howard told B OXOFFICE, "The artists were making decisions based on things as subtle as mood and emotion and what the audience should be paying attention to. If you have a deep emotional scene happening between two characters, you don't want people to be going 'Look at that pole over there -- it's so real!'"

Williams and Howard have been working at Disney since 1998's Mulan, but Bolt is their first time holding the reins and the pressure to excel was on. "We all know that this is the beginning of a new era, that the bar was going to be set very high," says Williams of directing Disney's inaugural production with Lasseter. "They don't settle for less than excellent," describes Howard of the company's creative process, "Every film you see from now on will take great leaps."

Lesseter has committed his career to this pledge of quality movie-making, vowing "I'm always thinking about how we can entertain our audience."

CLICK HERE to listen to our full interview with Chris Williams and Byron Howard.