close
Now that it has delivered solid box office overseas, Quantum of Solace is set to take America by storm.

Now that it's already playing very well overseas, everybody in the film industry will be watching closely to see how Quantum of Solace performs when it opens in the United States this coming weekend.

If foreign grosses are any indication, it looks as though Solace has a shot at being the strongest Bond yet.

"We would be thrilled if we could top Die Another Day, which opened to $47 million in November of 2002 and is the best opening ever for a Bond film to date," Steve Elzer, Senior Vice President, Media Relations for Columbia TriStar Motion Picture Group told B OXOFFICE via email. " Casino Royale opened to $40.8 million in 2006 and we feel we can beat that so the number we are gunning for is just over $47 million."

Meanwhile, Jeremy Devine, Vice President of Marketing for Rave Motion Pictures thinks that Solace could make as much as $68 million during its opening frame. 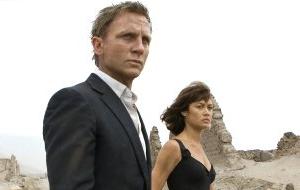 Predicting a box office increase from Day and Royale to Solace is actually a really safe bet. Each James Bond film since 1995's GoldenEye has posted stronger domestic returns than its predecessor. The biggest jump during that stretch of time occurred between 1999's The World Is Not Enough, which brought in a total of $127 million domestically, and 2002's Die Another Day, which grossed a staggering $160 million.

On Fandango, Quantum of Solace accounted for 20% of Monday's ticket sales as of 4 p.m. PST. In addition, a poll conducted on the website revealed that out of nearly 1,000 respondents a whopping 78% said that an edgier Bond, as played by Daniel Craig, makes them more interested in the franchise.

“ Quantum of Solace ticket sales are healthy - and are outpacing our advance sales for Casino Royale at the same point in the film’s sales cycle," Rick Butler, Chief Operating Officer for Fandango told B OXOFFICE via email.

Solace also appeals to a much different audience than the reigning box office champ, Madagascar: Escape 2 Africa, which means it has nothing to fear in terms of audience overlap.