close
BOXOFFICE was able to sit down with director Danny Boyle to discuss his latest film, Slumdog Millionaire.

Visionary filmmaker Danny Boyle recently continued his reputation as one of the most gracious and down- to-earth directors during a San Francisco visit to promote his latest endeavor, Slumdog Millionaire.

Boyle continues to challenge himself and his audience by experimenting with different genres and techniques, never pigeonholing himself for too long. Whether it’s his first two British hits, Shallow Grave and Trainspotting, or his last three radically different films, 28 Days Later, Millions and Sunshine, Boyle never seems to repeat himself. 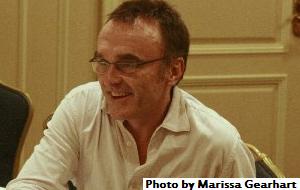 Still, the 52-year-old director doesn’t view what he does as genre hopping at all. It’s just an excuse to explore new worlds with each new project and not get used to a formula. “I try to do something different each time," Boyle told B OXOFFICE. "I guess it’s a bit like being a journalist. You get to learn about something different. I think you make a better film knowing as little as possible, so you have to submerge yourself into something without taking anything for granted. So if you make a thriller and it’s successful what you really shouldn’t do is make another thriller because you will just use the tricks and habits that you’ve used that have been successful. It’s kind of going back to a kind of innocence you have when you make your first film and you don’t know what you’re doing.”

For Slumdog Millionaire, Boyle and his crew left the comforts of Britain and headed to India in order to make a love story so unique and engrossing that it defies a simple logline. Slumdog is the tale of a blossoming romance between two orphans and all the obstacles—torture, culture clashes and the TV show "Who Wants to Be A Millionaire"—they face on their road to happiness.

With all the advance praise Slumdog Millionaire has been receiving at preview screenings and film festivals it’s easy to see why Boyle is happy with the finished product. On the other hand, he is also skeptical of receiving the wrong kinds of accolades. When I asked him if he was excited to receive a Lifetime Achievement Award at the recent AFI Festival in Los Angeles, his reply was energetic but also worrisome. “I’m a bit ambiguous about it because it’s obviously very flattering but it’s also rather worrying as well because I’ve never really had any awards and I’ve done all right.”

CLICK HERE to listen to the rest of our interview with Danny Boyle.