Documentary filmmaker Nick Broomfield has become accustomed to the controversy his films seem to attract. Whether it’s his feud with Courtney Love over her involvement with Nirvana lead singer Kurt Cobain in Kurt and Courtney or the questions he raises regarding the LAPD in Biggie and Tupac, Broomfield is used to stirring things up. 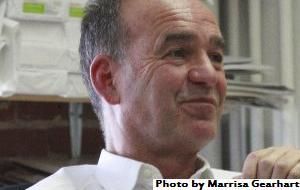 Still, the director sees controversy as a handicap at times. He feels that bad publicity can equal the death of a film, especially when it’s a small, independent project looking to be sold to a distributor. People get scared by bad press and don’t want to buy the film, resulting in zero offers. It also doesn’t help that Broomfield’s documentaries tackle controversial figures. Aside from Kurt and Courtney and Biggie and Tupac, he’s also known for his documentaries on Heidi Fleiss and Aileen Wournos (who Charlize Theron depicted in the Oscar-winning film, Monster ).

For his new film, Ghosts, Broomfield has stepped out of the documentary spotlight and ventured into his first narrative story. Ghosts focuses on Chinese immigrants smuggled into the UK and their search for a better life. The film is based on true events and Broomfield didn’t take the subject matter lightly. He researched every aspect of the story and he cast mostly non-actors to give the film a feel of authenticity. “I think a lot of what actors learn is how to cope with 150 crew, lights, clapperboards and continuity people and when you hit that mark, turn around and smile. Obviously non-actors can’t do that. So the casting process is very, very critical. You need to cast people, you need to role play them, see if they can act at all. Get a sense of who they are as people. And obviously at that point you’ve written a script so you want to make sure that that person is close to that master.”

Ghosts has made the festival rounds recently and Broomfield has been able to watch it with an audience several times to see what works and what doesn't. It’s also something he tends to do with his documentaries, looking at them years later to see how well they’ve aged and what things he might have done differently. “I think when you first finish a film you’re very interested because you’ve gone through umpteenth screenings to get a sense of what works and what doesn’t work," said Broomfield. "And it’s always great the first time the film is all mixed. But sometimes it’s quite interesting watching it three years, four years later, then you always think, 'Why did I do that, why didn’t I do this?' ... But I think as much as anything, probably in those three or four years you’ve just changed, you’ve moved on. And you did the best you possibly could at that time in your career as a filmmaker."

CLICK HERE to listen to our entire interview with Nick Broomfield .