close
BOXOFFICE caught up with the young star of "Hotel for Dogs" to discuss working with hundreds of canines.

A Conversation with Jake T. Austin

“I don’t think cats really match my personality,” confesses Jake T. Austin, the energetic 14-year-old actor with three Disney Channel and Nickelodeon television series on his packed resume. Luckily, his first big studio feature after the Little League charmer The Perfect Game surrounded him with over 100 dogs without a feline daring to draw near. 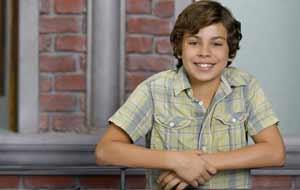 “The set was huge,” says Austin. “For every dog you needed a dog trainer -- that’s 200 excess dog people on the set, plus the crew, plus the entire cast.” Austin’s character Bruce is an orphaned foster child who with sister Andi (Emma Roberts of Nancy Drew ) channels his need for a family into rescuing homeless canines. “He’s timid and shy and a little insecure,” explains Austin, “but there’s definitely a confidence deep within that and a belief in himself by the end of the movie.”

In Jeff Lowell, Robert Schooley, and Mark McCorkle’s screenplay (based on the novel by Lois Duncan), that confidence comes from Bruce learning that he has the creative genius to shelter five-score dogs by dreaming up wild, homemade inventions to take care of their every need from a head-out-the-passenger-seat car simulation to a palatial, self-cleaning lavatory crowned by a golden fire hydrant. “Ivan Reitman directed that piece,” says Austin of the gilded hydrant sequence shot by the filmmaker of Ghost Busters, Kindergarten Cop and Twins. “Just seeing the whole contraption work before my eyes was incredible.”

On playing an engineering prodigy, Austin is humble. While he tinkers with motorcycles in his down time, the contraptions his character concoctions are “a little out of my league,” he admits, “but maybe with a little more practice and a little more effort.” Still, even pretending on set to be a boy wonder has its upside. “It was fun to take some glory and credit for the inventions,” Austin jokes.

“I would have given my left arm to take on this role,” says Austin, adding, “I love the way the movie turned out and I love everything about the script.” With his friends, Austin writes and directs his own short films, and has strong opinions on what makes a great movie for audiences his age. “Definitely something with a lot of action, a lot of twists and turns and unexpected travels,” Austin insists. “The movie needs to be clear and it needs to be captivating. Explosions everywhere. I don’t care if you have a dancing monkey,” says Austin, “something that makes you watch every second.” Even if, one assumes, said high-stakes, riveting flick co-stars a pack of cats.

CLICK HERE to listen to our entire interview with Jake T. Austin.