close
The Day the Earth Stood Still has broken a streak of bad luck for 20th Century Fox. The good news is that things are looking up.

The $31 million estimated haul of The Day the Earth Stood Still this weekend represents some relief for the studio. The house that Rupert built has not had a solid box office hit since What Happens in Vegas opened in May. The Happening, Meet Dave, Space Chimps, The X-Files: I Want to Believe, Mirrors, The Rocker, Babylon A.D., City of Ember, Max Payne and Australia have all failed financially in their own ways, some more than others.

Earth Stood Still may be the beginning of a new direction considering that the studio has some solid flicks lined up over the next several months. 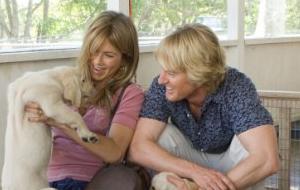 Marley and Me, which stars Owen Wilson and Jennifer Aniston, has a lot going for it considering that it's based on a best-selling novel. Plus, its PG rating will entice entire families to see it when it opens on Christmas Day.

Anne Hathaway and Kate Hudson headline Bride Wars, which opens on January 9. Both actresses have been solid box office draws in the romantic comedy genre. In addition, Bride also boasts similarities to 27 Dresses, which Fox found success with earlier in 2008.

Looking ahead to 2009, the studio has three lucrative franchise films lined up. X-Men Origins: Wolverine, Night at the Museum 2 and Ice Age: Dawn of the Dinosaurs should all post very solid numbers based on the track record of their predecessors. Meanwhile, James Cameron's Avatar opens in December and many are predicting that it will be a landmark film for 3D technology.