close
BOXOFFICE was at the Mann's Chinese Theatre for the 3D broadcast of one of the most anticipated football games of the year.

If anything, the first ever live broadcast 3D football game available to the public strained under being too popular. A collaboration by Cinedigm, 3ality and Fox Sports, the LA showing of the BCS National Championship bout between the OU Sooners and the Florida Gators was packed with football fans, men mostly, planted in every nearly seat and causing the historic Mann's Chinese to take on the odor of a basement rec room. Not that anyone minded – this is sports, and sports loves company. But 3D doesn't love the front row, and the beleaguered girlfriends who decided to take one for the team and sit apart from their boyfriends in the few chairs left in the very front of the theatre simply decided to take their glasses off and spent the game staring down at their Blackberries. 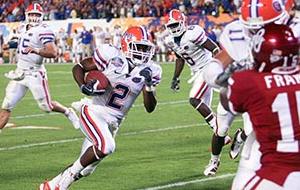 "If you have a good angle, it's like you're there, too!" enthused one boyfriend when making a pit stop to kiss his lady. And he was right. The BCS championships were exactly one month after the inaugural invite-only 3D NFL game, and the leap forward in camera work was astounding, akin to the advance from Edison's early shorts to DW Griffith. Cinedigm didn't produce that game, but they watched it and added those early, charming flubs to their knowledge about shooting 3D.

"We spent a lot of time planning and understanding the language of 3D live broadcast," says Cinedigm President Chuck Goldwater. The game looked great. In 3D, the details triggered gasps: the spin of the ball after a nasty tackle, a defender sneaking through the herd for the interception, a pom pom casually tossed in the air. A Gator made a soaring dolphin dive over his rivals that was aimed straight at the camera. What would be 3D football's dream money shot? "That over the top touchdown coming right at you," said Goldwater. The game -- a low-scoring defensive smash up -- wasn't up to it, but the visuals were still so realistic and unthinkingly natural that the only way to appreciate them was to slip off the glasses for a second and remind yourself of the look of flat 2D projection.

If the camera men showed favoritism to Florida's cheerleaders, they have a good excuse: The Gator clap – two long arms chomping towards the camera – has exponentially more wow factor than the Sooners' covered wagon. During halftime, the theatre showed a trailer for My Bloody Valentine 3D. Anticipating the rapid growth of 3D football (400 screens broadcasting it within a year, predicts Cinedigm), the company is planning a variety of targeted 3D ads.

"Regional spots," describes Cinedigm Sr. Vice President and General Manager Gerd Jakuszeit. "You'd have a snowblower ad in Minnesota, but you might have a tanning lotion ad in Florida." During the championship, commercial breaks were filled with well-received 3D clips of people playing dominos, surfing, snowboarding, and lounging around in bikinis.

3D is still figuring out how to let viewers track chaotic motion without wincing. When the elegant lines of a short pass turned into a collision from all directions, people closed their eyes, shook their heads, and grunted "Urmmph," like they, too, had just been elbowed in the stomach by Sooner Defensive Tackle Gerald McCoy. The stat boxes floated just past the fingertips, causing sportcaster Tim Ryan to muse, "I wonder what a graphic feels like to touch it?" He can't be blamed for filling up the air with nonsense. The game was beginning to get frustrating and the downtrodden Oklahoma fans started to trickle out – a reminder that 3D sports are the rare entertainment where the audience could hemorrhage before the end, no matter how gorgeous the picture quality is.

Still, the championship had been a rousing event, and likely even more so, says Cinedigm Sr. Vice President and General Manager Gerd Jakuszeit, in one of the other 82 theatres broadcasting the event around the country with liquor licenses and passionate exhibitors even dressed their ushers up in football jerseys. (Bipartisan, unless location demanded an allegiance.) The Florida transplants happy to watch their team reign supreme in their adopted town of Los Angeles were flushed with joy – particularly the two vocal female Gators who during the first quarter of the game had the theatre wondering if the sound was also in 3D.