Splendor in the Brass

Okay, I promise this is the last time. But speaking, as we were yesterday and the day before, of semi-ridiculous phallic movie single entendres: Constant reader Kurt B , in comments, noted an odd similarity between the plot point in Wednesday's movie in question, the 1947 Columbia cliffhanger Brick Bradford, and a certain defense program beloved of a certain former president with a Hollywood background.

Uh no, Kurt, but therein lies a tale.

The Curious Case of Benjamin Button -- Brad Pitt dressed up in a prune suit spells O-S-C-A-R! 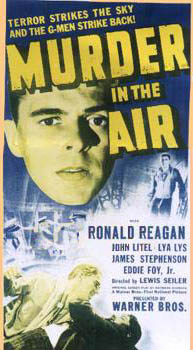 In any case, although Reagan wasn't at Columbia in '47, in 1940 he WAS at Warner Bros., where he starred in one of a series of B-adventure flicks featuring a Secret Service agent named Brass Bancroft (!). In the film, titled Murder in the Air, Bancroft is tasked to protect a new secret weapon called the Inertia Projector, which can destroy all incoming bombs before they hit the US. As an American military bigwig says in the film:


"It not only makes the United States invincible in war...but in so doing promises to become the greatest force for world peace ever discovered!"

Sound familiar? It's total nonsense, of course, but it does explain, years later, why Reagan was so gung ho about the Star Wars system most sensible people knew hadn't a prayer of succeeding -- he had already seen it work in a movie.

"Murder in the Air" isn't officially on DVD at the moment, but if you're really curious, there's an older copy available over at eBay . Turner Classic Movies also shows it from time to time, and you can watch the trailer here just so you know I'm not making any of this up.