Living in a 'Ghost Town'

David Koepp is primarily known as a talented Hollywood screenwriter but has recently turned his sights on directing. When I ask him what the biggest misconception of a screenwriter is, his answer is shockingly frank. “A lot of the cliches happen to be true. A lot of reviewers confuse what is a screenwriter’s work from what is a director’s work but that is such a complex issue you kind of have to be on the inside to be able to tell the difference.”

Koepp has been a working screenwriter for several years, collaborating primarily with Steven Spielberg, Ron Howard and Brian DePalma. He likes to balance out high-profile projects like Indiana Jones and the Kingdom of the Crystal Skull with smaller intimate stories like Ghost Town, his new film as a writer-director starring Ricky Gervais. A smaller story means a smaller profile which is just fine with Koepp. He’d rather write the big blockbusters and not direct them. His idea of working with A-list directors is that of a job for hire. You pitch an idea and hope for the best because the director always has the last word. There isn’t much of a collaboration between the director and screenwriter unless you can fool them into it. 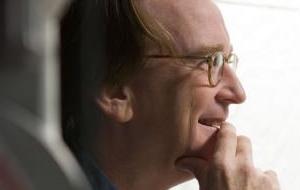 “There usually isn’t a middle ground, it’s either their way or you quit, or you can talk them into something. The best thing to do as a screenwriter is to bring them around to it so much so that they think it’s their idea. Directors have to take ownership of it because you have to believe it in order to direct it. I used to complain about directors pitching me back my own ideas as if they were just thinking of it, then when I started directing I started doing it and I sort of realized why directors do it and it’s because to fully get behind an idea so you can direct it you have to believe it was yours.”

Even though Ghost Town is a smaller production compared to the Hollywood blockbusters he usually writes for, Koepp feels actors can sometimes carry the same baggage no matter what the project is. But when his directors hat is on all he asks for is common sense and professionalism on set.

“I really only ask one thing, know your lines. I’m not saying we have to use them all but if you don’t know them we can’t go anywhere. I love to improvise, I love to come up with new stuff but you have to depart from somewhere. And if you get to the set where every second is so expensive and so precious and somebody doesn’t know their lines yet, it’s an incredible waste of time and it holds you back. When people show up and they’re prepared I love them, I’ll let them get away with anything.”

Ghost Town is now available on DVD and Blu-Ray.