close
BOXOFFICE caught up with British character actor Matthew Goode to discuss his role in Watchmen. 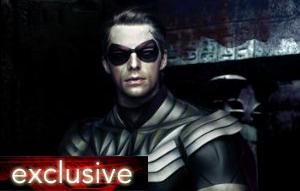 Whether he’s ready or not, Matthew Goode is about to become more recognizable to film fans everywhere. The British character actor has flirted with fame since making his Hollywood debut with Mandy Moore in 2004's Chasing Liberty but has decided to keep a low profile the last few years. Most people will recognize him from his strong supporting turns in Match Point and The Lookout, but next month he will be seen in one of the lead roles in the comic book epic Watchmen. Goode is also on DVD shelves this month in the period love story Brideshead Revisited, a commentary on class and power that played art houses last summer.

Over the last few years, the 30-year-old actor has struggled against being typecast as “the posh bloke” in British melodramas that have helped pay the bills. His role as a suave bank robber in The Lookout was a rebellious first step in the opposite direction and now playing a menacing superhero in Watchmen may help tarnish his BBC reputation forever.

Working in big Hollywood movies may be more Goode’s speed but there’s also the issue of CGI and green screens to deal with, something he feels can take a little getting used to.

“I think that can affect your performance because half of it is coming from the person next to you," Goode told B OXOFFICE. "One of the main things in Watchmen is when I’m in my ice palace in the Arctic of wherever the f--- it is and there’s supposed to be a hundred foot Dr. Manhattan but there’s not. Instead there’s an eyeliner on the roof and I’m trying to dodge this invisible massive hand. But that’s part of the collaborative process.”

With the decades of anticipation from fans of the graphic novel, Goode is starting to feel the pressure of starring in a film that will most likely be picked apart by comic book and film lovers alike.

“I know the fans are portrayed as being mad but Watchmen is more of an intellectual novel. It’s vast scope and epic in quality and you have to understand it’s very different from any other graphic novel out there. So you’re dealing with very intelligent people who are very sensitive to that sort of material. So there’s a huge amount of pressure because of that but I think we were very lucky to get Zack Snyder to direct it and be very passionate about it.”

Speaking of director Zack Snyder, most insiders thought he’d take a break after making 300 but instead chose to dive head first into the property that many directors, including Paul Greengrass and Terry Gilliam, couldn’t seem to make work. The result is something that Goode describes as being the polar opposite of a watered-down comic book movie like Fantastic Four.

"I’m not trying to trash movies like Fantastic Four but those movies aren’t really my thing. And even Zack told me at the beginning of shooting Watchmen, 'I’m not f---ing making Fantastic Four. If you think I am, go to hell.’”

CLICK HERE to listen to our entire interview with Matthew Goode.