close
BOXOFFICE sat down with the director and cast of the new film that pays tribute to Star Wars nerds everywhere.

Just a Couple of 'Fanboys' 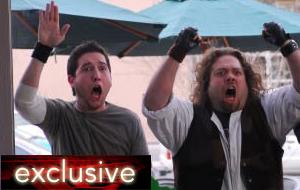 With the current release of Fanboys, the love letter to Star Wars geeks everywhere can finally be seen in theatres. Much debate has been made over the political tug of war between director Kyle Newman and distribution heavyweight Harvey Weinstein including how the film should be made, marketed and eventually released. Entire plotlines were re-shot, the film was delayed for almost three years and in the end producer Kevin Spacey stepped in to smooth things out between Newman and Weinstein.

The online community was heavily involved in backing the film from the beginning, especially since it hits directly to the fanboy culture they represent. Now years later and with a final print ready to go, director Kyle Newman and two of the film’s stars Dan Fogler and Sam Huntington recently came to San Francisco to promote the film and bask in the legendary Skywalker Ranch. Newman in particular is happy to see his film finally get a proper release and a stamp of approval from George Lucas himself.

“I’m just really excited and overjoyed, somewhat relieved too. And after all the things that have gone on with it and all the hands that have tried to tamper with it we ended up with something so close to what we originally set out to do which is miraculous. I’m hoping we get to branch out to more cities and go promote it there and I’m up here too as a fan visiting the ranch so no way has it deterred anything for me. It’s only strengthened my resolve as a fan because we’ve had the fan community come in and have our back which was shocking and amazing and I’m humbled by the whole thing,” Newman told B OXOFFICE.

Co-star Sam Huntington became friends with Newman on set and the duo bonded over their passion for all things Star Wars. A connection with a director is important to him as it signifies the beginning or end of what is normally a long shooting schedule. Huntington has things he looks for in his directors but when things don’t go well on set he also can get frustrated very fast.

“I look for passion, excitement for the project. A good understanding of where exactly you are in the story so that they know how to direct you, efficiency. I think all of those things make for a good director and I think Kyle possesses all of them. I did a small movie in Texas where the director would just walk off the set in the middle of the scene and you don’t know what the hell’s going on. It was a tiny movie that I hated and this guy just didn’t care at all and finally he just ended up walking off and I was in a canoe with my shirt off in the middle of a river tied up. And you just see this guy walk off and I’m asking, 'Where’s he going?'”

Dan Fogler also headlines Fanboys and is primarily known for goofing around in comedies like Balls of Fury and Good Luck Chuck. Yet it will probably come as a surprise to some that he has also done musical theatre on Broadway. In fact, Fogler is the most surprised of all. Growing up he had no intention of being on Broadway but is grateful to have things work out this way for him.

“I wasn’t a Broadway guy, I did musicals in high school and then went to college and was like, 'Okay, I want to be an actor.' I want to study straight acting, I didn’t study musical comedy or anything. I did everything and it’s amazing how it comes full circle, you acquire all these skills and you have to be ready when the opportunity comes. I spent a lot of time getting away from musical theatre doing improv, standup comedy, Mamet in a sweaty blackbox theatre doing plays with my friends. If you had asked me two or three years before Broadway happened I would’ve been like, 'What are you talking about? I’m going to end up on Broadway in a musical?' This is how it works and that’s a beautiful thing.”

Make sure to listen to our entire interviews with Sam Huntington and Kyle Newman .