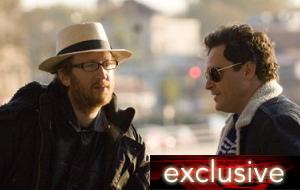 Director James Gray has a new film in theatres called Two Lovers co-starring Gwyneth Paltrow and Vinessa Shaw. However, much of the film’s attention has been centered on lead actor Joaquin Phoenix for two reasons, his recently announced retirement from acting and the fact that if he’s telling the truth, Two Lovers is his last completed film before he begins his new career as a hip-hop rapper.

Two Lovers marks Gray’s third collaboration with Phoenix which dates back to 2000's The Yards and 2007's We Own the Night. Those films also co-starred Mark Wahlberg and Gray sees the two thespians as very professional and easy to work with, which explains why he’s paired up with them so frequently.

“In the case of Joaquin and Mark they are very perceptive, intelligent people and they have a great emotional intelligence which is tremendously underrated in our society," Gray told B OXOFFICE. "They are very attune to details of human behavior and have wonderful senses of humor about the way we act and about our frailties and about our phoniness at times. They’re also very willing to take chances and they know by now that I would approve of that. They’ve changed very much since I started working with them, they’ve gotten more famous but they’ve also gotten much better as actors. They have much better craft.”

While the story of Two Lovers revolves around a shy loner who is caught between two women and can’t seem to get his life on track, Gray is fully aware that the plot slightly mirrors Phoenix’s present retirement from acting. There’s even a scene where Phoenix is in a New York cab freestyling hip-hop rap which happened accidentally and was played for laughs on set but now seems ironic on screen. Gray wishes his friend the best but secretly hopes what most of us do, that Phoenix just needs time to “recharge his batteries” and come back to acting fully energized.

“My answer is always the same and it’s always the truth and it’s that I can’t get inside that guy’s head. For selfish reasons I’m incredibly sad about it because I love him and I don’t like seeing what’s going on," said Gray when discussing Phoenix's odd behavior. "I’d love to work with him again but if he wants to do that I guess I have no authority to say otherwise. I don’t know what to say about the guy, he’s certainly committed. He’s building a recording studio in his house, but I don’t know. It’s a very selfish answer I would give which is that I’m very frustrated and I wish that he were willing to keep acting. Part of me thinks that he just needs to recharge his batteries and he’s like Sean Penn. Sean Penn announces every five minutes that he’s retiring and he’s not going to act anymore. Thankfully he hasn’t been telling the truth because he has this wonderful work that he’s done.”

Two Lovers is now playing in select theatres nationwide and On Demand.

CLICK HERE to listen to our full interview with James Gray. Read our review of the film here .