close
BOXOFFICE takes a look at I Love You, Man's place in the recent surge of male-bonding flicks. 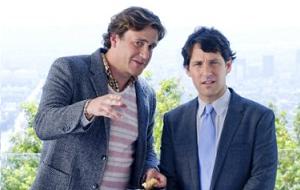 I Love You, Man, the latest in a slew of modestly-budgeted comedies about male bonding, is set to hit theaters on March 20. If Man continues down the path set by similar films that have opened recently– Forgetting Sarah Marshall, Role Models –then it could do some damage at the box office.

Based on the concept that having a best man is almost as important as finding the right woman to marry, Man focuses on Peter Klaven (Paul Rudd) and his search for a best friend (Sydney Fife, played by Jason Segel) before his upcoming marriage to fiancée Zooey (Rashida Jones).

Rudd and Segel spent much of their early careers playing secondary roles–Rudd in Clueless, Anchorman, The 40-Year-Old Virgin, and Knocked Up, and Segel in Knocked Up and TV’s How I Met Your Mother –before breaking out in leading roles last year: Rudd in Role Models and Segel in Forgetting Sarah Marshall. Both films banked more than $60 million domestically, which proves that the two comedic thesps are capable of playing strong leading men.

“I always knew that Paul [Rudd] would be a major leading man… I’m honored to have been a part of his first front-and-center big comedy, and I know that I Love You, Man will only solidify Paul’s place on the A-list,” Role Models director David Wain told B OXOFFICE.

In recent years, male-focused buddy comedies have been topping out at the box office in a big way. Ever since Judd Apatow started bringing the genre back to life–his last ten projects have averaged over $90 million in domestic box office, with six of those ten topping the $100 million mark–buddy comedies have been on an upsurge. B OXOFFICE asked Tucker Max, producer of the upcoming "guy’s movie" I Hope They Serve Beer In Hell, and author of the book of the same name, for his perspective on the genre’s recent rise.

"There is no question that male-centric humor can do very well, especially if done right,” said Max. “Just like Hollywood has recently figured out that women like to see movies with intelligent, independent female protagonists ( Sex in the City, Mamma Mia, etc), Hollywood is figuring out that men like to see movies with guys acting like regular guys – being goofy, funny, and at times, crass – because this is what most guys are like."

Luckily for the cast and crew of Man, the comedy isn't opening against films that will be directly competing for the same audience. Duplicity, which stars Julia Roberts and Clive Owen, will grab more female demographics and Knowing stars Nicolas Cage, whose box office stock is certainly falling.