close
You won't find 12 Rounds star John Cena in any family films. He's all about blowing stuff up and fighting the bad guys.

Off the Top Rope 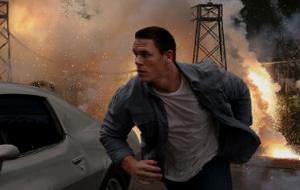 Wrestler-turned-actor John Cena doesn't necessarily see himself following in the footsteps of his fellow grapplers Hulk Hogan and Dwayne "The Rock" Johnson.

Both Hogan and Johnson have played off of their images in a comedic way in order to gain success in the movies. Hogan starred in a handful of gimmicky films in the mid-90's from Mr. Nanny to 3 Ninjas: High Noon. Obviously the most successful of the bunch, Johnson has carved a niche for himself by starring in such Disney family films as The Game Plan and Race to Witch Mountain. Mountain is on pace to bring in a respectable $65 million during its theatrical run. He's also had supporting roles in such blockbusters as The Mummy Returns and Get Smart.

Cena's latest film is 12 Rounds, and it's his second starring role after 2006's The Marine. Just like The Marine, 12 Rounds finds Cena doing battle with a man who has kidnapped the woman he loves. Explosions and fights ensue.

“I’m gonna stick with action. I think action is the way to go," Cena tells B OXOFFICE. "Everybody sees a void in the genre as the showcase action guy. I want to be the guy they can go to for a great action movie. I want to be the next big action hero.”

His critics would probably tell him to abandon those hopes. The Marine was universally panned, and 12 Rounds wasn't even screened for journalists. Yet Cena's target audience isn't exactly the kind that enjoys the opera. The Marine was able to find a cult following on DVD after posting a relatively mediocre domestic haul of $18.9 million ($20.6 million when adjusted for inflation).

WWE Films, which is the production company behind 12 Rounds and The Marine, obviously sees potential in expanding their brand to the world of film. They currently are developing a handful of projects including Journey of Death, which is being billed as a modern-day Western. Such popular wrestlers as Kevin Nash and Al Snow are rumored to be starring in the film.

For Cena, there are some differences between working up an audience at a wrestling match and hitting the right notes on set.

Whether or not audiences are willing to give Cena multiple takes at becoming a convincing leading man remains to be seen.