close
Film leaders spoke at the annual ShoWest convention about the world of exhibition, and Warner Bros. premiered new footage.

State of the Industry 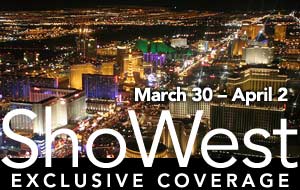 Even though many other industries across the country are failing right now, the movie business is performing well. That was the main point of the 2009 State of the Industry Update, which was delivered by Dan Glickman, Chairman and CEO, Motion Pictures Association of America and John Fithian, President & CEO of NATO on Tuesday morning in Las Vegas at the Paris hotel's Le Theatre Des Arts.

However, before Glickman and Fithian took the stage the audience was treated to a montage which highlighted all of 2008's $100 million-grossing films as well as exciting footage from four heavily anticipated new releases from Warner Brothers: Terminator Salvation, The Hangover, Harry Potter and the Half-Blood Prince and Sherlock Holmes. The public airing of the Holmes footage, which stars Robert Downey Jr., Jude Law and Rachel McAdams, marked the first time that a frame of the film had been seen by the masses. Downey Jr. made an appearance to introduce the clip, and both he and the footage received solid applause.

Director McG was on hand to introduce the footage from Terminator Salvation, and he kept the tone of his speech light without making any jokes about Christian Bale's infamous temper tantrum on set. Writer/director Todd Phillips ( Old School ) was also around to introduce The Hangover, which centers around a bachelor party in Vegas that goes wrong in many funny ways. The footage was met with roaring laughter from those in attendance. Alan Horn, President & COO of Warner Bros., introduced the clip from Half-Blood Prince since the cast and crew are currently busy filming the final two film installments of the highly lucrative franchise.

After all the movie watching, it was time to get down to business.

"When the going gets tough, the tough get going to the movies for relief," said Fellman during his speech. When discussing Hollywood, which he was quick to point out is made up of not only movie stars but also hard working exhibitors in small towns across the country, Fellman boasted that the business creates $60 billion in economic activity, which in turn leads to 1.5 million jobs. Fellman also revealed to the packed audience that worldwide box office reached another historic high in 2008 with $28.1 billion in receipts, which topped 2007's record of $26.7 billion.

Fithian spoke mostly about the future of the film industry, and he boasted that the slate of films scheduled for 2010 and 2011 is not lagging due to harsh economic conditions. Fithian recently met with seven major production studios, and only two of them said they were scaling production back slightly. For the rest, it's business as usual. While Fithian was hesitant to estimate how may screens will be made digital by the end of 2009, he did provide reassurance by saying that thousands of transitions are "waiting in the wings." As expected, Fithian noted that recent credit problems are mainly responsible for the transition not going as planned.

One negative aspect of the exhibition tindustry hat was discussed was piracy. While no official figures on piracy have been released by the MPAA since 2005, local organizations are releasing data to help exhibitors be aware of how much of piracy is occurring. In addition, Fithian highlighted a program which rewards theatre employees who catch people trying to pirate films by providing them with a financial bonus. The program has rewarded around 80,000 workers since 2004.

Exhibition industry veterans Tony & Dean Kerasotes were named ShoWesters of the Year thanks to the fact that their family-owned theatre chain is celebrating its 100th anniversary this year. The award was presented to the two brothers by Chuck Viane, President, Walt Disney Studios Motion Picture Distribution.