close
David Cross discusses his role in this summer's Year One as well as the status of the Arrested Development movie. 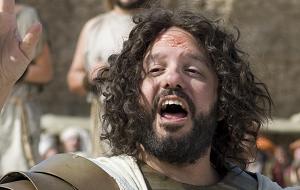 "The Bible truly is one of the funniest books I've ever read," declared David Cross on his Grammy-nominated comedy album “Shut Up You F***ing Baby.” Between starring in cult hits like Arrested Development, Mr. Show and—surprisingly— Alvin and the Chipmunks, the outspoken atheist has penned stand-up routines that have polarized the secular and devout. But with Year One, both can reach one point of agreement: the comic who once joked about being molested by the Virgin Mary is perfectly cast as Cain.

B OXOFFICE caught up with Cross to discuss his role in the new Harold Ramis flick.


How did you prepare to play the Bible's first evil human?

The first thing I did was go to the Little Brother program, where I adopted a kid for one day a week. I adopted this kid from out in Brooklyn, Bedford-Stuy. This poor kid—his mom worked 60 hours a week. He didn't have a lot of family, but he was a good kid at heart. I befriended him and hung out with him, took him around. Then killed him with a Glock—that was pretty much it.

Then do you think Cain got a bad rap, or is it understandable?

The way I see it, my interpretation of the Bible, is that Abel's a little bit of a dick. He's haughty, he's pompous, he's a snitch. He's a tattletale, he's constantly whistling, he's constantly doing little titty-twisters, “Kick Me” on your back. You go to shake his hand, and he pulls his hand away before they can touch. And, you know, I don't appreciate any of those things.

So Abel's a frat guy?

And that makes you Revenge of the Nerds ?

If Revenge of the Nerds ended with a Columbine-style mass slaying.

What's your history with the Book of Genesis?

I like their solo stuff better than their whole prog-rock thing. I'm a huge Peter Gabriel fan, not so much a fan of Phil Collins or Mike and the Mechanics. So, yeah, I like their early stuff and The Lamb Lies Down on Broadway.

Have you ever done "Land of Confusion" at karaoke? It's awesome.

No, no. I'm legally not allowed to karaoke.

But you don't tend to play characters who follow the law?

Yeah, well one is fantasy, Hollywood make-believe—lights and makeup. And the other's real life.

So you don't think there should be an 11th Commandment: “David Cross Shall Not Sing Karaoke.”

God, no. There should be an 11th Commandment—and a 14th and a 17th Commandment—but they have nothing to do with me. Mostly about destruction, staying away from cards, stuff like that.

Fair enough. What was the first Harold Ramis flick you saw as a kid?

Probably Animal House. Yeah, Animal House. I watched that movie many, many times. I remember seeing that at the theatre with my mom—a big comedy fan, my mom. I wasn't old enough to see it, but I saw it over and over again.

What was the advice he gave you most on set?

He's very mellow. There wasn't a whole lot of advice. We'd do a scene, and then he'd rein in my tendencies to improvise.

What did you wear underneath your costume's robes?

My lucky panties. I got them at Anthropologie about 10 years ago—I had a gift certificate from Sundance. Frilly things with Hello Kitty.

Can you talk about using sacrilege for comedy?

For me, it's quite easy because I do not respect religion or the people in the hierarchy of religion. I have contempt for it—it’s almost like my earthbound duty. There's no fine line for me to walk or participate in because I think it's all kind of silly and made up.

Who else in ancient history would you want to be?

Do you feel there's a balancing act where the film wants to appeal to both Sunday school classes going in for a laugh and atheists?

No, I don't. I think there was a very conscious effort to stay away from pronouncements or takes on the Bible. I think it has way more to do with seeking answers, and about one's place in the world and whether there is a guiding force or not. I think it has more to do with what is happening to these characters in this world. We're pretty careful in not making definitive pronouncements on whether Jesus is real or God is real.

Is the film going to draw out the crowd that made Passion of the Christ a huge success?

Elderly, confused Catholics? I hope so. There's no reason everyone in the United States of America shouldn't see this film twice. I mean literally everyone: no exceptions.

What can you tell us about the Arrested Development movie?

As far as I know, a deal was made for a script. A script is due sometime this spring. And that's all I know. Everyone's excited to do it. I know Mitch [Hurwitz, the show's creator] is writing it, and that's all I've got -- I'm not trying to be coy.