close
With the help of Channing Tatum, Fighting could take a growing phenomenon and make it mainstream. 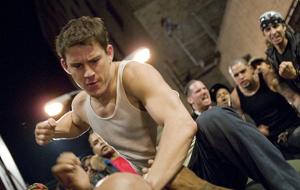 To call this February's Street Fighter: The Legend of Chun-Li a flop would be an understatement. Grossing a paltry $8.7 million domestically with a reported $50 million budget, Street Fighter was both a critical and commercial failure. The principal complaint many moviegoers had with the film? Despite the name, it featured hardly any action.

Fighting, which hits theatres on Friday, will, it seems, be different. The film focuses on Shawn, played by Channing Tatum, and his rise to the top of an underground New York City street fighting circuit under the tutelage of Harvey Boarden, portrayed by Terrence Howard. The trailer, which opens with the ominous line, "Where the competition is brutal, and everyone is fighting to be the best," offers glimpses of multiple fight scenes that clearly owe a debt to the styles of mixed martial arts (MMA) as well as the UFC and various other professional MMA leagues.

While the story itself is broadly fictional—the notion of a shadowy organization of bored, hyper-rich, New York City dilettantes sponsoring a clandestine series of illegal bouts in Manhattan's top locales is far fetched—the fighting styles espoused are not. The moves, techniques, and action is hyper-real; this, of course, is the film’s grand draw.

The 'underground fight movie' is nothing new. Gladiator (the 1992 flick) pitted Cuba Gooding Jr. and James Marshall against each other and Brian Dennehy; Fight Club, which grossed over $100 million worldwide, pitted Brad Pitt, Ed Norton, Jr., Jared Leto, and Meat Loaf against each other and everybody else. Most recently, David Mamet's Redbelt dug into the world of MMA fighting in the writer/director's typically cynical fashion.

MMA combat has exploded in popularity over the last decade, providing a movie like Fighting with very strong box office potential. However, because of the depth of dedication of MMA adherents, the film's portrayal of combat may risk turning off the rapidly growing fan base that ought likely be its core audience.

"The more mainstream coverage the sport can receive, the better," said Matt Brown, Managing Editor of FIGHT! Magazine when discussing the film. "[But] there is a misconception that [MMA] is 'no holds barred' and a 'fight to the death' type of thing. That couldn't be further from the truth. There are a number rules to protect the fighters." Rules, of course, that are likely to be lacking in the cinematic interpretation.

This could be a problem for some. “These films tend to leave a bad taste in my mouth,” said Scott Hendler of LegacyFit in Miami, Florida. “[Hollywood] has in my opinion failed to produce a flick true to the MMA scene to date.”

While it remains to be seen whether the most hardcore of MMA fans will take kindly to Fighting, there is no question that the huge surge in MMA’s popularity makes this the perfect time to release the film. The Vin Diesel/Paul Walker vehicle The Fast and the Furious came out in 2001, right at the height of the street racing craze. While many underground racers derided the over-the-top portrayal of their pastime, none could argue that the film made an impact—as well as a sizeable profit with a domestic haul of $144.5 million ($183.7 million when adjusted for inflation). After the recent success of the fourth film in the F&F franchise, a fifth venture is already in the works. Their is certainly enough interest in fighting culture for a similar cultural phenomenon to occur.

"MMA is the fastest growing sport in the world," says Brown. "There are mixed martial arts gyms sprouting all over the country. Old boxing gyms are now converting. Jiu-Jitsu schools are now adding MMA classes. And the best is yet to come."

Hendler himself saw that conversion first-hand. "I began boxing... [then] I saw people practicing MMA, and I knew it was for me." He also admits to having fought in prize matches himself, including bouts in the U.S., Thailand, and Costa Rica.

Still, Tatum’s character sweeps the scene as a rank amateur, and not all coaches and fighting professionals think that it’s such a good idea to portray the entry to the ring as such an easy feat.

“Many amateur MMA fighters rush onto the scene after only a few months of training,” says Doug Matina, an instructor at Miletich Fighting Systems New York—and that’s not good. “From my coaching experience, I would advise at least a year of dedicated training, no less than four times a week, before entering a contest.”

What’s more, Matina notes that those members of the public who aren’t as familiar with the sport are likely to take Fighting as a representation of all of MMA, “as in the 1980s when one without experience might call any type of kicking or punching they saw ‘karate.’”

Surely, the producers of the film wouldn’t mind if Fighting did as well—or had as great an impact on the cultural milieu—as Karate Kid.