close
Director McG discusses which writers were really behind his new film as well as the future of the series. 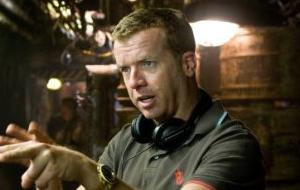 In the two years since McG announced he was directing the fourth Terminator, fans have gone from petrified to pumped. The infamously mono-named filmmaker best known for teaching Cameron Diaz to skateboard in Charlie's Angels proved his mettle on the Comicon Q&A minefields and convinced no less than Christian Bale to sign on as John Connor. Terminator Salvation picks up years after Skynet has atom-bombed the world. McG talks to B OXOFFICE about his vision of the Apocalypse and the real possibility that robots could take over the Earth.

Are there things in Salvation we're going to understand that were hazy in the Terminator mythology before?

Absolutely. We pay a great deal of respect to the mythology of the first two pictures, and to the hardcore, there are many tips of the hat. We see how Kyle Reese became the efficient fighter that he is; we see how John Connor becomes the leader of the Resistance. There's little bits and pieces all the way through for those who know the first three pictures very intimately. But we also wanted the picture to work for the uninitiated.

You and Bale and pretty much everyone else on set were kids when the first film came out. Was that long-term fandom stifling? How did you deal with that?

When I saw the first film, I was probably too young to see it. It scared me tremendously and I loved it. It was a chase movie, a monster movie, effectively a zombie movie with an unstoppable killing machine. And I loved it—I was scared, but fascinated. The second film I credit with turning me into a filmmaker because I was so blown away by the visual impact of the film with the invention of liquid metal, and the fundamental cleverness of the story where the antagonist of the first picture becomes the protagonist of the second picture—what a dark twist. And it really touched me in a way that made me want to dedicate my life to film. Those two pictures in particular were huge touchstones of my growing up and the shape of my aesthetic.

Is 2009 a different time for an Apocalypse film? The Terminator series has always brought us to a world that's one step away from chaos, and now in this film, that chaos happens.

Well, I think we live in a dangerous time, and I think this should be a thinly veiled cautionary tale. I've always liked films [that explore how] that which makes humanity great will also be its undoing. Is it progress, or is it initiating our demise? That goes for a great many inventions and medicines and weapons—many, many things. It's the original conflict that Oppenheimer [J. Robert Oppenheimer, father of the atom bomb] had to face when he was trying to fuse the atom and create new energy. He had to balance the scientific progress of it against the potential destruction of it. And here we are today with a crazy guy in North Korea and a very dangerous time in the Middle East and a dangerous time here at home in the United States and just about everywhere in the world. So it's a great time to say, "Don't let the genie out of the bottle, and let’s be respectful of each other and certainly our planet."

Have you screened the film for Arnold Schwarzenegger yet?

That is likely to happen. He's seen the film before and he seemed very pleased, and he's seeing it again this weekend. I look forward to hearing what he has to say about it.

Can you talk to me about your approach to shooting the action sequences? I heard you were inspired tonally by Children of Men, but do you also favor that long, patient, excruciating choreography, or do you like the short bursts?

In this picture, there are a great many sequences that play for a long period of time without a cut, and I like that very much. I like very specific, choreographed, intelligent action. I don't like cutting as a false sense of action. I think that that is a bluff, and I don't like rewarding filmmakers who choose to go down that road. I like very thoughtful, planned-out action that furthers the story, furthers the characters, and does so in camera without the benefit of just cutting to create pace and energy. Ultimately, I think that's just caustic to the audience. I take pride in action sequences where there's one- and two-minute sequences without a cut. The car sequence in Children of Men with Julianne Moore in the car is breathtaking.

Related to that, was it difficult to convince the producers that you didn't want to go blue screen?

Not that difficult. They had a great deal of faith in what I wanted to do with the film regarding its tactile quality. I wanted it to feel real. I wanted Stan Winston [designer of the first two Terminators, as well as Predator and Jurassic Park ] to build all the machines. I wanted the actors to interface physically with everything that was happening in this difficult world of duress. And I didn't want to fake that on the green screen using C-stands and tennis balls and eye lines for actors, because I think you feel that detachment. I wanted a very specific tactile reality.

The T800 and the T1000 were pretty much indestructible. How do humans battle the T600s?

The 600s as articulated by Kyle Reese in the first picture were easy to identify because of their prosthetic rubber skin. The problem is, the T800 becomes so human and realistic that you can't really identify him, save a barking dog here or there. This film is about the advent of the T800, and they're coming on line a little earlier, and naturally, that's a problem for Connor and everything he's built. The T600s carry a lot of firepower, but they're slower and easier to knock down. This film introduces all the machinery that led to the birth of the T800. We have Harvesters, Transporters, Hydrobots, Terminators, Hunter-Killers, T1s—so you see machines that were suggested and introduced by James Cameron, but then we also introduce a new machine language that was around in 2018 because we know the T800, the Arnold Schwarzenegger model, came in 2029. We show the R&D that got him there. Just like any automobile or the computer that you're working on, I would imagine it’s got a colored screen where screens used to be monochromatic. It probably has several gigs of memory where it used to be just megabytes. It has a video card when those used to be slow and cumbersome. We're seeing the advances we'd see in any technology from a car to a washing machine.

And what's interesting is when James Cameron put together the first Terminator, the U.S. military didn't have war robots. And now we do, and they look like tanks—kind of like some of the ones in your film. In the Terminator universe, why would they start making them look like humans?

That was for infiltration. There are killing machines that are designed to be cloaked, and then there are Terminators that, in the Schwarzenegger model, were designed to infiltrate the outposts of the Resistance so they can get a higher killing capacity. We suggest that in this picture, the Resistance is putting up a pretty game fight. They’ve got more than guns, they've got plans—some good hardware to fight the good fight. But it's the Terminators that tip the scales in favor of Skynet.

Do you think we're approaching a time where robot domination could happen?

I think so because we live in a time of artificial intelligence that you and I take for granted. Look, I'm a fan of the great heyday of science fiction, the late ’70s and ’80s. Alien, Blade Runner, Terminator —those pictures from that time were fantastic. But in 2009, we've deconstructed the human genetic code. We can clone a sheep, we can give you an artificial hip if you have a bad one, an artificial heart. If you're depressed, no one wants to talk about your mom and your dad; they want to give you serotonin reuptake inhibitors to make you feel better. And there's a BlackBerry in my pocket that if I misspell a word, it will go back and fix it on my behalf. So artificial intelligence and technical advancement, the likes of which we could never imagine, is here.

In interviews, you've talked about the great contributions that Jonah Nolan [co-writer of The Dark Knight ] made to the script, but he isn't credited as a writer. Can you tell me what's going on with that?

I don't really know myself. I never met Michael Ferris and John D. Brancato who ultimately got credit, and I thought we changed the script a great deal. But Jonah did some, Shawn Ryan [ The Shield ] did some, Anthony Zuiker [ CSI ] did some and Paul Haggis [ Casino Royale ] did some. I guess they can only credit so many people, but it's not like the Ferris and Brancato draft deserved that writing credit. That's a decision of the WGA which I have no part in. I credit Jonah as the architect of the picture, and I'm certain Christian feels the same way. He represents the hard time on the ground in Albuquerque, N.M., when we shot the film and really got it going.

Is this film a turning point for you creatively?

Yes it is, indeed. I'm most comfortable in this genre. I'm proud of the Charlie's Angels movies, and We Are Marshall —that was a very personal movie about overcoming sadness, and that was something I was going through at the time. I have a fear of flying, and I had to face my demons with that. We Are Marshall was very cathartic in that respect. But these are the action movies that I call upon, and this is the genre—intelligent science fiction—where it's designed to be thrilling on an immediate level in the theatre, but it's also designed to sit with you for a long time after the film has ended where you think about the theological implications of what's being suggested. That's why I had everybody read The Road and Phillip K. Dick, whose Do Androids Dream of Electric Sheep? became Blade Runner. Those are the influences when making an intelligent film in this genre. I think The Matrix is a great example of an enjoyable picture when you watch it in real time, but there's much more to it that you could spend four years in graduate school discussing.

The title is Salvation, but this is the first of three new Terminator movies that are being floated out there. What's the tone of the ending?

The ending's a little elliptical and suggests a storm on the horizon at a time of war. By no means does this have a happy ending where it wraps up in a nice, tidy bow. People die along the way in this picture, and no one is safe. We have stories for the next two pictures, but I would never be so bold as to presume they'll be made. The audience must speak and demand more Terminators. If they respond to this, we'll make them. If not, we'll be very sad.

Terminator Salvation opens nationwide on May 21.