close
The month of April set a new box office record, but fell short of April 2006 and April 2004 when adjusting for inflation. 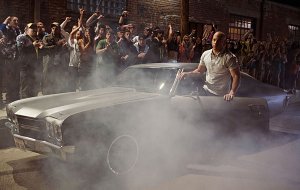 April of 2009 was up a very impressive 40 percent over the $496 million gross of April 2008 and up 7 percent over the $646 million gross for the month of March. In making those comparisons, it should be noted that April 2009 benefited from Easter falling during the month, whereas both April 2008 and March 2009 did not benefit from the Easter holiday. The $3.13 billion total box office of 2009 to date is running 16 percent ahead of last year’s box office at the same point in time.

The next three weeks remained strong, thanks in large part to the performances of Disney’s Hannah Montana: The Movie, Warner’s 17 Again and Sony’s Obsessed. The strong debuts for Hannah Montana and 17 Again were widely expected, but the impressive debut of Obsessed was not. All three films registered opening weekend debuts that currently rank among the top 11 all-time opening weekends for the month, and all three films were driven largely by female audiences ( Hannah Montana: The Movie obviously skewing younger than the other two films).

Another notable April performer was Disney’s Earth. The nature documentary opened to a larger than expected $4.02 million on Earth Day, but did slow down some after the initial rush-out. With that said, the film’s nine-day start of $17.66 million was still very solid for a documentary film.

The month wasn’t without its disappointments and under-performers though. Despite strong reviews, Miramax’s Adventureland was unable to find an audience at the beginning of the month. The following week Warner’s Observe and Report opened below expectations, while Fox’s Dragonball Evolution was dead on arrival. Lionsgate’s Crank High Voltage was unable to match the box office performance of 2006’s Crank and was one of the month’s larger disappointments when taking pre-release expectations into consideration.

During the second half of the month, Universal’s State of Play and Paramount’s The Soloist both opened in line with their modest expectations. However, both films have had disappointing runs given the box office history of their respective leading actors and their respective production budgets. Finally, Universal’s Fighting did open above expectations during the last weekend of the month, but is already fading away rather quickly as the high-profile releases of May wait in the horizon.

For the month of April, the top ten films were as follows: