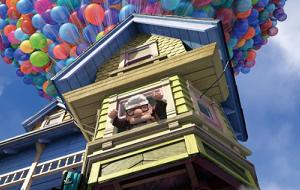 The balloons—all 26.5 million of them to be precise—went up at the Cannes Film Festival last night for the opening film, a new piece of animation from the Disney/Pixar team in digital 3D.

The screening of UP, Pixar’s tenth production, marked the first time in the 62 year history of the festival that an animated work took the coveted opening slot although unlike predecessors such as Shrek it will not be competing for the Palme d’Or—the film is showing out of competition. Shrek distinguished itself by becoming the first animated film to compete in the film festival since 1953.

Among those who mounted the red-carpeted steps of the Palais des Festivals was Pixar chief John Lasseter, director and Pixar veteran Pete Docter, producer Jonas Rivera, Bob Peterson who voices the dog Dug and was head writer and co-director and French star Charles Aznavour (the canine vocals in the dubbed French version).

Inside the 3000-seat Lumiere theatre the tuxedo brigade and the glitterarti donned the utilitarian 3D spectacles like a bunch of well- behaved school-children on an outing.

The critics generally were positive about the film which follows the uplifting tale of a 78-year-old balloon salesman Carl Fredericksen who finally fulfils his lifelong ambition of tying thousands of balloons to his house and flying away to the wilds of South America. His reluctant companion is an optimistic Wilderness Explorer called Russell, aged 8.

Docter told eager journalists that the starting point had been simply “super grouchy guy holding these fun colourful balloons and it was something we thought we would like to play with. It just seemed to capture what we were after in terms of escaping the world. We even worked out the number of balloons it would take technically to lift a house like the one in the film and our experts concluded it would be 26.5 million.”

Lasseter noted that in animation genuine emotion was one of the most difficult things to achieve. “Behind every laugh there should be a tear. I know we can make it fun and beautiful but heart is the most important thing.” He described the Cannes invitation was “One of the greatest thing to happen to us in our careers.”

He admitted that at certain stages in every film they have that sinking feeling. “We thought at various stages in production that all ten of our films were terrible. We always believed in the idea of the movie but with certain sequences we had to work and work to make the story ring true. We refined many sequences some as many as 30 or 40 times. It takes four years to make most of our films and three years or more is taken up with ensuring that we get the story right. Films seem to be getting faster and faster, but all of our films have a feeling of taking time and celebrating the quiet moments as well. You want the audience to be swept away without thinking about the process. That is the secret of animation. “

While having a main character who is an elderly and grumpy gent might appear to be an unlikely hero, Lasseter believes that he is someone who “learns that the big adventures in life are all the small things that happen in everyday life.”

Later at a meeting to introduce this year’s competition jury under the leadership of French actress Isabelle Huppert who has had 17 films over the years in the official selection and twice has been awarded a best actress accolade, was adamant that was not there to “judge” films but to be part of a more discursive process.

Partnered by among others director James Gray, actress Robin Wright Penn, writer Hanif Kureshi and actress and director Asia Argento, Huppert explained: “It is difficult to explain and express why you love something and why you are touched by work of art, music or a painting. It is a deep issue, and it is way beyond judgement.”

Robin Wright Penn concurred: “The word to judge is so negative we are all artists and we have a pulse in the way that films and the lyric inside the film touches our pulse. There will be a different reaction for all of us and we will have to wait and see where are hearts are beating.”

Playing devil’s advocate Hanish Kureshi declared that “Awards are probably a terrible idea except when you win one, when they seem like a good idea. This may be a classic year for the selection and there are fantastic directors presenting their films this year and it will be interesting to find out what they have to say about the world we live in today.”

The tournament has begun … or as the French might say: “A l’attaque!”

Check out our review of UP here .