close
Drag Me to Hell star Lorna Raver is not the only actor or actress to land a showy role late in life. 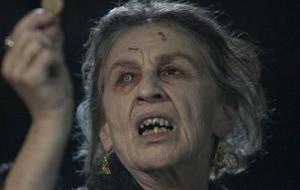 Actress Lorna Raver is ready for her close-up—at last.

Raver, a movie and television veteran who entered the business nearly 20 years ago, is front and center in Sam Raimi’s new horror film Drag Me to Hell.

She plays the old woman who casts a nasty curse on leading lady Alison Lohman.

It’s the kind of showy supporting part that could land her plenty of follow-up work. It wouldn’t be the first time a character actor used a juicy role to restart or even ignite a career.

Jenelle Riley, film and television editor for Back Stage, hopes Raver has a publicist to handle her newfound fame.

“She should take advantage of this moment,” Riley says. “This could be like her Hannibal Lecter.”

Riley points to actor Jackie Earle Haley’s turn in 2006‘s Little Children as a similar breakthrough. Haley earned fame as a child actor in Breaking Away and The Bad News Bears but hadn’t worked in a major project in 20 years before he landed that role, Riley says.

Last year, character actor Richard Jenkins finally got a starring role to call his own in The Visitor. The result? An Oscar nomination and new respect from his peers.

“People in the industry know and love him, but he’s far from a household name,” she says.

Actress Anne Ramsey earned a late-in-life career boost by stealing an entire picture out from under Billy Crystal and Danny DeVito in 1987’s Throw Momma From the Train, which won her an Oscar nomination. But the actress passed away a year later before she could tackle more challenging roles

Some actors can’t fully leverage the boost a high profile role brings them. Riley singles out Robert Forster, who scored a juicy part in Quentin Tarantino’s Jackie Brown 12 years ago

“I hoped he would do more after that,” she says. “I don’t think he’s complaining. He hasn’t disappeared, but I thought he could be getting the same kind of roles as Paul Giamatti.”

AFI historian Patricia King Hanson says actress Gloria Stuart had retired after a long and successful film career when James Cameron cast her in a small but critical role in the 1997 blockbuster Titanic.

Suddenly, the actress was the toast of Hollywood again at age 87. She even grabbed an Oscar nomination.

“She had never been a star in movies. She usually played unsympathetic parts,” Hanson says.

Even a major star like George Burns used his performance in 1975's The Sunshine Boys to boost his career.

“It was a different kind of role for him. It was a career changer,” says Hanson.

When an older actor makes a big splash in film, Hanson adds, he or she opens the eyes of Hollywood producers.

“They see them on talk shows, and they’re vibrant and funny. ‘Let’s hire them for this part,‘” she says. “People suddenly realize they’re not just an old geezer.”