close
Harold Ramis tells BOXOFFICE about the inspiration for his new film, Year One.

Comedy Legend Does the Bible 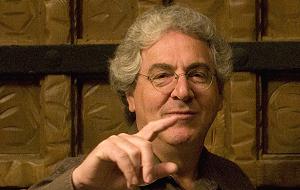 Harold Ramis has written and directed many of this generation’s most formative comedies. Caddyshack, National Lampoon’s Animal House, Meatballs, Ghostbusters, Groundhog Day —his filmography is the bible for every comedy director of today. With Year One, Ramis takes on the Bible itself in a provocative, goofball comedy starring Jack Black, David Spade, Michael Cera, Bill Hader and Hank Azaria that recalls the sprawling star-studded romps of his ancestors, Monty Python and Mel Brooks. Ramis talks to B OXOFFICE about turning golden calves into comedy gold.


What triggered you to write a comedy about the Book of Genesis?

It’s not really about the Book of Genesis. When the studio asked me what it was about, I said it tracks the psychosocial development of mankind. I was interested in tracking some of our most fundamental ideas about human development—the ideas embedded in Genesis. Although some people see it as a morality tale, I see it as the development of civilizations. That’s very intellectual, but the real diagnosis is I was interested in taking characters with a completely contemporary sensibility and putting them in the ancient world.

Then what is the role of the apple?

The Garden of Eden story, it’s not just about sexual temptation. The tree holds the knowledge of good and evil—for me, that’s the dawn of moral consciousness. I know rabbis who think the story of Eden is the development of the individual. In our movie, the people in the garden know nothing about the world beyond the forest they live in, and in the garden, everything is given to them—they have no decisions to make. They don’t have to work for a living, everything is perfect, and that’s like the world of childhood. Around 13, we wake up to the knowledge of the world and have the responsibility of making choices for ourselves. And usually at 13, you make the wrong choice: You eat the fruit. You transgress in some way, do the thing your parents have told you not to do forever. And that’s when you know you’re starting to grow up. For some kids, it happens around 14 now. When I was a kid, it happened around 16, 17—it’s accelerated. But once you break from that innocence of childhood, then you’re in a world of pain. You have lots of decisions to make, and you have to take responsibility for the choices you’ve made. The characters, once they’ve eaten the fruit, they’re kicked out of their tribe. They’re launched into a world of difficulties.

When you wrote this, was Jack Black already on your mind because he’s best known for being a wild half-man, half-child?

Jack’s been on my mind since I first worked with him as an actor. We worked together in Orange County, and I thought, “Boy, we’ll have to do something.” He’s a perfect combination of an innocent and a complete rascal. He can play these characters who in real life are these awful things—they’re kind of a mess—but you still like them.

Did you have any of the other actors in mind?

I didn’t know Michael Cera, but when I partnered up with Judd Apatow, the co-producer, Judd turned me on to Michael’s work. I’d seen a bit of him on Arrested Development, but I went and watched all the episodes and then Judd and Greg Mottola showed me scenes from Superbad, and I thought they would make an interesting combination. We put them together, and when they read the script for us, they were just great. There was no question in anyone’s mind that that was the team.

Did Monty Python’s Life of Brian inspire or shape the film, or did you run away from its template?

I watched all the Bible comedies and all the Cecil B. DeMille films, even some Pasolini with Gospel According to St. Matthew, to see how people treated the ancient world. Of all of the comedies, Life of Brian is far and away the best, the funniest. People kept referring to Mel Brooks’ History of the World, but I like Life of Brian. No offense to Mel Brooks—when I heard The 2000 Year Old Man when I was in college, that’s the first time I realized how funny it could be to put a character in the ancient world that thought and spoke like we do.

Remember Rosencrantz and Guildenstern are Dead —the story of Hamlet through two minor characters? That’s another device I’ve always been interested in. It’s not unlike Life of Brian, either. I thought it’d be interesting to introduce characters who are acquainted with the major players in Genesis but aren’t those characters. They move from one to the other, so the movie could be moved form Cain and Abel to Abraham and Isaac. Of course they never meet in the Bible—they’re separated by lots of time—but we took the liberty of dividing them by geography, not by time, so our characters can pass from one to the other.

Other names that are conspicuously low-key are God and the Devil.

There’s a debate between Michael and Jack about if God exists. Jack needs to believe that there is a God behind everything that is happening, that there is a plan for him. And Michael believes that life is accidental, and therefore terrifying. So that seems to be a central conflict for our society and for individuals. Is life meaningful or not? Is it purposeful, and is this a purpose we invent for ourselves, or does it come from some place external to us? That’s the “God Idea,” and as I get older, I think a lot about this myself. I come to the conclusion the movie comes to, which is no matter what you believe—whether God exists, or doesn’t—[we] still have to take personal responsibility for ourselves and the world around us. That approach where God is going to solve our problems—I hope not.

Can you talk about comedy’s role in provoking philosophical thought like that?

Comedy, when it’s funny, can be good enough. But for me to spend two hours in a theatre, a comedy better be real funny, or make me think a little bit. I often come out of movies, and people actually say, “I don’t want to think.” I don’t know how to not think. I can’t think of a time or situation where I would want to turn off my brain. So I think a movie can be funny and actually make you think just a little bit. It doesn’t have to be like literature or taking a course—just to start thinking about important questions in life. I always think, “If it doesn’t matter to me, why would it matter to anyone else?”

Is there anyone in your family—a devout second cousin—you were worried would take the film the wrong way and be mad at you?

I actually showed the movie to some people in the Anti-Defamation League, B’nai B’rith, just to make sure they were comfortable with the way Abraham is portrayed. They were fine with it—in fact, they’re showing scenes from the movie at a benefit in May. So they were cool. I also showed it to four psychiatrists, and they signed off on it, they liked it.

As a producer for the film, do you think that people who own movie theatres can comfortably reach out to Sunday schools?

Hardcore fundamentalists—in any religion—aren’t coming to the film. They think all movies are sinful. But there are lots of people with their own faiths and religions across the world, and I think the movie could be a springboard for discussion with young people. I have sons who are 14 and 18, and I couldn’t drag them into services. Comedy is a way in for young people, and I bet discussions will come out of it. Parents can see it with their kids and say, “Well, what do you think? Do you think life is meaningful? Do you think it’s purposeful? Is there a God, and if there is, what does he want from us—or she?” So yeah, I think in this movie, and any movie, parents should go with their kids and have a discussion about it: “What do you think about the violence in that film?” or “What do you think about the way women were treated in that movie?” Talk about the politics of the film. Everything—whether you know it or not—has a message. Our movie’s PG-13, and as I said to the MPAA, we live in a PG-13 world. Parents need to take responsibility for explaining what’s going on to their kids. There are a lot of bad explanations for what’s happening, but the more parents get involved on important subjects, maybe the more secure kids will feel in the world and maybe it will all solve some personal problem that kids experience.