close
Sam Raimi's decision to return to the fright flick genre may inspire other prestigious directors to do the same.

Drag Me to Horror 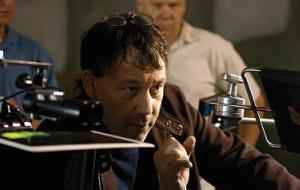 Quick - name the director of the new Friday the 13th remake, The Uninvited or Quarantine, some of the more visible horror movies released in recent months.

Now, who directed Frost/Nixon, Changeling and The Departed ?

The A-list directors—Ron Howard, Clint Eastwood and Martin Scorsese to name three—avoid the genre like a horde of flesh-eating zombies.

Could the new horror film Drag Me to Hell change that?

It’s the latest from director Sam Raimi, a man who wallowed in the genre mines with the Evil Dead trilogy but graduated to the mainstream—and mainstream respectability—courtesy of a certain web slinger.

Tony Timpone, editor of Fangoria magazine, says a strong box office showing by Hell could mean Raimi has some company.

"Horror has been big business in 2009, so if Drag Me to Hell re-establishes Sam Raimi in the genre in which he started, I bet other A-listers will take a dip in the bloody pool once more,” Timpone says.

That doesn’t mean the Coen brothers will be remaking Candyman or April Fool’s Day anytime soon.

“I don't picture top directors flocking to the onslaught of horror remakes, but instead developing original properties or films derived from best-selling books," he says.

A-listers didn’t always avoid the horror genre. Stanley Kubrick embraced the shock with his classic interpretation of Stephen King’s The Shining when his artistic clout was unimpeachable.

Danny Boyle delivered the stunning 28 Days Later, but that was years before he entered the Oscars winner circle with Slumdog Millionaire.

And Ridley Scott gave us the sci-fi/horror classic Alien way back in 1980, but the director was just starting his illustrious career.

Redlitz says Raimi’s new horror film isn’t much of a leap backward but a return to the genre after a protracted hiatus. And he didn’t set out to shoot Hell. Economic concerns nudged him along.

“He was initially going to produce it but the best way to make it happen was for him to direct it himself,” says Reditz.

If a big-name director does tackle horror in Hell ’s wake, it might be Guillermo del Toro, who has “always kept in touch with his genre roots,” asserts Reditz.

Today’s directors also realize that horror allows them to work with unknown actors and still have a a chance at box office success. The genre boasts a solid track record for return on investment, something even a respected auteur will likely keep in mind.

“I would love to see more directors look at horror as a cool genre and start playing around with it,” Reditz says. “I hope directors keep an open mind.”