close
Christian Bale's tirade on the set of Terminator Salvation won't hurt the film's box office. If anything, it might help. 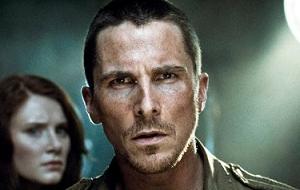 In Hollywood, celebrity temper tantrums are nothing new and sometimes a leading man’s frat-boy antics can even enhance his image in the public’s eye and boost his box office appeal.

But there are limits to the public’s patience with stars as evidenced by the reaction to Tom Cruise’s couch-jumping on Oprah and Mel Gibson’s anti-Semitic outburst after a drunken driving arrest.

So, will moviegoers punish Terminator Salvation for the expletive-laden hissy fit pitched by its star, Christian Bale?

Probably not, say analysts and celebrity image consultants who believe Bale’s actions did not cross the line.

Bale, who plays John Connor in the latest Terminator tale, erupted into an f-word fountain last July while filming a scene for the flick in New Mexico. The tirade against director of photography Shane Hurlbut was recorded and a tape hit the Web in February.

Bale railed against Hurlbut for walking on camera while checking the lighting for a scene. Bale screamed at Hurlbut, threatened physical harm and promised never to work with him again.

“You are trashing my scene!” Bale yelled. “Seriously, man, you and me, we’re f***kin done professionally.”

After the tape went public, Bale quickly apologized, taking full blame for his behavior— an act that may have quashed the controversy and helped improve his image with fans.

“Celebrity antics can bring to a project a lot of attention—sometimes good, sometimes bad,” said Michael Levine, head of Levine Communications in Los Angeles and author of the book Charming your Way to the Top.

Levine said that more box office fallout can be expected the closer a celebrity meltdown comes to the movie’s opening. Time, he said, tends to heal old wounds.

Tom Cruise professed his undying love for wife Katie Holmes on Oprah in 2005. Cruise jumped up and down on Oprah’s couch, a scene that became water-cooler fodder after it was posted on YouTube. Soon after, Cruise, a Scientologist, publicly criticized actress Brooke Shields for using antidepressant drugs and had a confrontation with Today Show host Matt Lauer over his religious beliefs.

The poor showing caused the head of Viacom, which owns movie studio Paramount, to say that Cruise’s behavior cost the film between $100 million and $150 million at the box office. Sumner Redstone later severed ties with Cruise, saying the actor had committed “creative suicide.”

Also in 2006, Gibson was arrested for driving under the influence in Malibu weeks before the opening of his film Apocalypto. Gibson spewed expletives and anti-Semitic remarks, at one point asking a sherrif’s deputy, “Are you a Jew?”

The movie took in a disappointing $15 million on its opening weekend and earned $50.9 million in domestic theaters. While the poor performance could be the result of several factors, including that the actors spoke in an obscure Mayan language and was extremely violent, Gibson’s tirade likely did not help.

While Bale’s tantrum was unfortunate, he did not insult a religious or ethnic group and did not venture into crazy antics, a fact that should limit the fallout on Terminator Salvation, according to financial analyst Hal Vogel.

“It’s a different case,” said Vogel of Vogel Capital Management in New York. “It wasn’t offensive to the audience. He didn’t lose his credibility.”

Time and Bale’s quick reaction to the controversy may also limit fallout. The incident hardly came up during Bale’s publicity appearances to promote the movie. And the Terminator franchise is healthy, with the latest film promising the type of action and explosions summer moviegoers crave.

“It doesn’t hurt and it might even help,” Vogel said.