close
Michael Haneke's The White Ribbon lead the list of winners at the 2009 Cannes Film Festival. 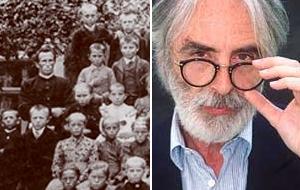 The mild-mannered Austrian director Michael Haneke, a darling of global cineastes on the strength of that intriguing puzzle of a film Hidden ( Caché ), scooped the Cannes Film Festival's top prize the Palme d'or last night for his latest work, The White Ribbon.

Jury president Isabelle Huppert, the French actress, insisted on presenting the award herself, marking the first time a jury president has presented the prize since Clint Eastwood gave the award to Quentin Tarantino for Pulp Fiction. It was an emotional occasion because Huppert had worked with Haneke on the controversial The Piano Teacher which won three major awards including an acting prize for Huppert at the festival in 2001.

Shot in sober black and white, with no musical score and told with a stately and deliberate pace, The White Ribbon is set in a secluded northern German village on the eve of the First World War where inexplicable happenings occur.

British filmmaker Andrea Arnold, who two years ago received a special jury prize for Red Road, was back in the Cannes spotlight again last night when she received the same jury prize for her second feature film, Fish Tank.

Her new film shot on the council estates of Essex focuses on an alienated teenager and the disruptive effect her mother's new boyfriend has on their close family life. Michael Fassbender, who won plaudits for his portrayal of Bobby Sands in Hunger at Cannes last year, plays the boyfriend alongside 17-year-old first-time actress Katie Jarvis, who was cast after being spotted arguing with her boyfriend at Tilbury station.

A French film that had been tipped for the Palme and topped all the critical polls, A Prophet by Jacques Audiard received the second top prize of the Grand Prix. Audiard, whose work including Read My Lips always has been highly regarded in France, is little known outside his own country. His story of a young Arab man's coming of age and into power during six years inside a corrupt, brutal prison is was regarded as being in a class of its own.

The best actor award went to a virtually unknown Austrian-born actor Christoph Waltz who plays a smiling SS officer in Quentin Tarantino’s war epic Inglourious Basterds opposite Brad Pitt and Michael Fassbender. Tarantino claimed in Cannes that if he hadn't found a perfect actor for the role, he might have pulled the plug on the whole movie.

Other prizes included a shared jury prize (with Fish Tank ) for Korean director Park Chan-wook for Thirst, about a priest turned bloodsucker who doesn't like to kill and which the director has called "a vampire romance." The best scenario prize was given to Lou Je a banned Chinese director of Spring Fever which starts with a lively gay sex scene and proceeds to chart the passionate and destructive relationship between closeted bookseller Wang Ping (Wu Wei), and assertive travel agent Jiang Cheng (Qin Hao), who dons frocks and sings at transvestite clubs at night. The same director was banned after his last film, Summer Palace, was shown in Cannes in 2006. Spring Fever was shot secretly.

Filipino director Brillante Mendoza emerged as best director for his depiction of modern-day life in the former American colony in Kinatay, which means "massacre” which is exactly what happens on the streets of Manila for Peping, a young criminology student.

The Canera d’Or award for best first film went to Warwick Thornton's Aboriginal drama Samson and Delilah about two teenagers who live in an isolated community outside Alice Springs. Delilah spends her days caring for and painting with her Nana, Samson is a chronic petrol sniffer who cast his eyes on Delilah.

Jury president Huppert said she was sad to see the end of her duties and to bid farewell to fellow jurors such as Robin Wright Penn, Asia Argento and Hanif Kureshi.

"These were precious moments in the life of an actress," Huppert said. "I'm sad that it's ending."