Lars and his demons 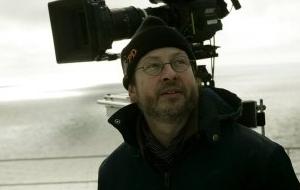 The fabled enfant terrible of Danish cinema, Lars von Trier, was called to account for latest controversial offering when he appeared in the bear pit of a Cannes Film Festival press conference today.

The film, Antichrist, which had been booed and jeered at its two media screenings yesterday, stars Willem Dafoe and Charlotte Gainsbourg as a couple seeking to overcome the grief of losing their only child.

It has quickly become the most talked-about title at this year's festival, depicting gruesome scenes of genital mutilation, graphic sex and, even more bizarrely, a talking fox.

Von Trier, famously monosyllabic in his responses, was asked by one scribe to explain and justify the film. “It is a strange question–that you expect me to excuse myself. I do not have very much to say, except that I believe that you are all my guests and not the other way around. I have made this little film of which I am fond–I did not make it for you or even for the audience.”

Boldly claiming that he was guided by “the hand of god,” and that he believes himself to be the “best film director in the world” von Trier suggested that having exorcised some demons during the making of the film he had not reached a state of harmony with himself.

He said: “it is more the routine of making a film that is therapy, and that means getting up every day and going to work. I do not believe that films can cure anybody."

Asked about his dedication in the film to the great Russian director Andrei Tarkovsky von Trier admitted he felt a strong kinship with him. “I know he saw my first film and he liked it. He is a generation before me and I feel related to him. And I also feel related to Ingmar Bergman but he did not feel related to me."

How did his actors survive the rigours of working with such extreme material? Charlotte Gainsbourg admitted she felt at times that the director had gone too far but she had felt reassured enough to continue. Willem Dafoe had fewer concerns.

“I enjoy his company and his sense of humour–he does not allow any preparation or rehearsal before you shoot. You walk in and you start shooting. You have no idea what the camera is going to do or what you can do. Basically you make the scene on your feet and he reacts to it. You soon start to get very flexible and open to lots of impulses. He is a great film-maker in the way that he guides you.”

Von Trier suggest that he is not an authoritarian director. “I hope I do not give orders. If I do then that it is wrong. I like to keep as close to the actors as possible and to keep an intimate communication with them and I think we had that.”

Asked if he was concerned about the open hostility to the film he stressed that he did not think of audiences or critics when he was making a film. “So perhaps it will be a catastrophy. I have been hit by the critics before and that is a good starting point."

Von Trier's explained that part of the motivation for making the film stemmed from personal difficulties. "Two years ago I suffered from depression. Everything, no matter what, seems unimportant, trivial. I couldn't work. Six months later, just as an exercise, I wrote a script. It was a kind of therapy, but also a search, a test to see if would ever make another film.

"The script was finished and filmed without much enthusiasm, made as it was using about half of my physical and intellectual capacity. Scenes were added for no reason. Images were composed free of logic or dramatic thinking. They often came from dreams I was having at the time, or dreams I'd had earlier in my life.

"In any case I offer no excuses for Antichrist. Other than my absolute belief in the film–the most important film of my entire career!"

Von Trier, a notoriously nervous traveler, claims he feels “Best when I am at home.” After his current reception on the Riviera he will no doubt be speeding back to Denmark as soon as he can.