close
The idiosyncratic auteur returns to the legendary festival that helped make him who he is today. 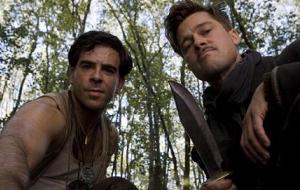 After developing and tweaking his latest project for almost eight years, Quentin Tarantino, a Cannes Film Festival devotee from the days of Reservoir Dogs, returned to the Croisette yesterday (Wednesday) to unveil his highly anticipated piece of Second World War hokum.

Inglourious Basterds, complete with an unusual spelling that Tarantino declined to explain, unfurls in Nazi-occupied France during Second World War and was the first title in the Cannes competition to start anything like a media stampede.

The queues starting forming at 7am for the 8.30am screening during which the reactions in the 3000-seat auditorium indicated that there was certain unadulterated glee being derived for the Dirty Dozen -style antics loosely inspired by Italian director Enzo Castellari's 1978 war film.

Tarantino, who first came to Cannes 17 years ago with his stylish, blood-spattered Reservoir Dogs, thrilled audiences in 1994 with his Palme d'Or winner Pulp Fiction, and the festival also saw the launch of Kill Bill: Vol. 2 and Death Proof.

Having served on the jury in 2004 Tarantino justifiably can claim to be a bit of an expert on the Cannes experience. “It is a bit of a colossus – like the Mount Olympus of cinema. During this time on the Riviera cinema matters and it is important, partly because all the world’s press are here. They argue and jostle and do this and that. I don’t make films for specific audiences. I make the movies for Planet Earth and Cannes is the place that represents that,” he told the assembled media hordes.

Asked if he could consider the tale as “Jewish revenge fantasy” Tarantino, talking in his trademark staccato bursts of ideas, agreed that there might be aspects of that notion. “But the way I look at is that my characters change the outcome of the war, but if my characters had existed all things that happen later in the movie are plausible.”

Although it wrapped three months ago none of the cast present, among them Brad Pitt, Diane Kruger Daniel Bruhl, Michael Fassbender, Eli Roth and Christophe Waltz, had seen the finished article before last night’s red carpet premiere.

Brad Pitt, who was one of the last of the cast to come on board and who plays a gung-ho American lieutenant, explained that Tarantino had come to woo him with the script last summer. “We talked about the back story and our discussions moved late into the night.

“In the morning I noticed there were five empty bottles of wine on the floor and something resembling a smoking apparatus—not sure what that was all about—and six weeks later I was in uniform and working on the movie. Quentin assured in August we would make it in time for Cannes, yet we only wrapped three months ago. I wish all films could be made this way. It was good to work with Quentin, who is a real auteur.”

Tarantino was delighted with his catch. “Artistically me and Brad have been sniffing around each other for a time, you know lingering looks, and little notes to say how much we liked each other. He has always been one of the actors I would like to work with. One of these days I hoped I would write a character for Brad and in writing the text for Aldo I thought this is the one for Brad and I got worried in case he would not do it.”

The wunderkind director suggest that the last two decades have seen Second World War films on a regular basis but they always show it from “an anti-war, misery perspective."

Tarantino continued: "I don't mean to say I'm pro-war, because I'm not. But in the Forties and Fifties people made movies that were thrilling and exciting. War movies don't always have to show things from the perspective of the victim. And it's also not really about war. I treat the Second World War in a similar way to how E.L. Doctorow treated Ragtime. I'm taking a historical time and putting in my own ideas and characters.”

Jury president Isabelle Huppert at one point had been considered for one of the French-speaking roles (eventually taken by actress Melanie Laurent) but Tarantino had no qualms about the situation affecting her powers of judgement. “We both like each other, and I would love to work with her one of these days,” he said.