close
Ben Stiller's Night at the Museum films may have made it cool to go to museums again.

Trip to the 'Museum' 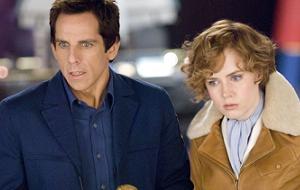 The success of the second Night at the Museum film has the real-life Smithsonian hoping some of that Hollywood magic will rub off on them.

Night at the Museum: Battle of the Smithsonian conquered the Memorial Day weekend box office, taking in an estimated $70 million. The Ben Stiller comedy has popular museum exhibits come to life after hours, recreating the hit formula of the 2006 film, which was set at the fictional Museum of Natural History in New York.

The first movie boosted attendance at the real American Museum of Natural History by more than 20 percent, according to some estimates. The museum established a self-directed tour, pointing new visitors to some of the exhibits featured in the film, such as the great Easter Island statues.

The movie brought in about an additional 50,000 visitors, over a six-month period, says museum spokesman Steve Reichl.

That kind of success did not go unnoticed at the Smithsonian, which has rarely allowed movie crews into its facilities. The institution, which encompasses 19 museums, 17 of which are in Washington, D.C., was also impressed by the lines that snaked around the block at the National Archives after the release of the 2004 film National Treasure.

“After National Treasure there were lines of people waiting to see the Declaration of Independence. That’s what we want,” says Smithsonian spokeswoman Becky Haberacker.

The Smithsonian cooperated with the filmmakers, allowing them to film some scenes inside the National Air and Space Museum and its historic main castle building. The studio filmed there for four days last May. But the filmmakers weren’t allowed to touch such sensitive artifacts as the original Wright Brothers airplane.

The guts of the Smithsonian were recreated on a soundstage in Vancouver. The museum was shown an advance copy of the script and suggested some changes along the way, most of which were adopted by the studio.

“We wanted to see how we were going to be portrayed,” Haberacker said. “We had some concerns. They took them seriously.”

Haberacker said she hopes the movie will dispel the notion that museums are dull, dusty and boring. The museum is counting on the film to bring younger people into its halls.
“We hope people look at this movie and say, ‘I want to know who the real Amelia Earhart was,'” she said.

The Smithsonian has published a treasure map that museumgoers can use to locate some of the artifacts and exhibits featured in the movie. The map can also be found at the museum’s web site . Also on the web site are interviews with film star Amy Adams and director Shawn Levy. The movie is also playing at the Smithsonian’s IMAX theater.

But don’t expect to find everything from the movie in one of the Smithsonian’s hallowed halls. You’ll have to travel to the Art Institute of Chicago to see the famous paintings “American Gothic” and Edward Hopper’s “Nighthawks.”

A scene from this summer’s Transformers: Revenge of the Fallen also features the Smithsonian’s new Air and Space museum. The Smithsonian, which does not charge an admission fee, is hoping its Hollywood debut will lead to a starring role in people’s vacation plans.

“If this movie gets people in the door, once they’re here they will see the full range of what we have to offer,” Haberacker said. “They’ll see we are more than just a place you are forced to go to on a school field trip.”