close
The upcoming adaptation of Thor has made the potentially risky decision of casting an unknown actor as the lead. 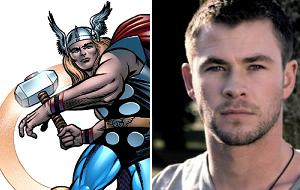 The news that Chris Hemsworth would play the blonde Nordic god Thor in the superhero movie of the same name was greeted with a one-word reaction: who?

Keen observers will recognize Hemsworth as the doomed U.S.S. Enterprise captain George Kirk—father to James T. Kirk—in this summer’s Star Trek. But other than a few TV roles, the 25-year-old Australian actor is as unknown as unknown can be.

So why cast someone with only 15 minutes of big screen time under his belt to star as the golden-haired, hammer-wielding god of the Marvel Comics universe?

Marvel is being mum on the decision. But there are a number of reasons, largely financial and partly artistic, why unknowns are sometimes cast instead of A-list actors.

When Hollywood studios risk $100 million or more on a summer blockbuster movie, they are keen to protect that investment. One way is to cast bankable stars, actors who have the ability to “open” a movie, or guarantee that the opening weekend take will be fattened by dollars spent by their fans.

Film history is filled with great fights between studios and directors over who should get leading roles in films. Paramount Pictures balked at casting unknown Al Pacino to play the key role of Michael Corleone in The Godfather.

The studio wanted Robert Redford or Ryan O’Neal for the part. Eventually, Jack Nicholson, Dustin Hoffman, Warren Beatty and Martin Sheen all auditioned until the studio relented and gave Pacino a chance.

Conversely, casting an unknown can save a studio the millions of dollars it would otherwise cost to hire a big name, some of whom command a salary of $20 million plus a cut of the profits.

Sometimes the gamble pays off. Sometimes it fails.

Take James Bond. Sean Connery was a complete unknown when he was cast as the secret agent 007 in 1962’s Dr. No. That gamble was a huge success.

But in 1967, the studio tried for a second strike of lightening by casting unknown model George Lazenby to succeed Connery. He lasted only one film.

Then again, when the producers looked to cast a new Bond to replace Pierce Brosnan, they choose Daniel Craig, a relative unknown who was roundly slammed for being too rough, too unattractive, and too blonde. Yet his two movies have proven to be very successful entries into the Bond franchise.

Sometimes, studios cast well-known directors and actors in order to cover themselves should a movie fail.

“This way, lower level executives can tell their bosses: ‘Hey, we got the best writer, the best director and the best actors,'” says Howard Suber, a professor at UCLA’s film school an author of The Power of Film.

Suber believes that casting big names meant more when the characters were fleshed out, three-dimensional people. Actors such as Burt Lancaster and Gregory Peck could bring gravitas to a role that demanded a full range of emotion, a complexity of character.
But studios don’t have to pay star salaries when the films are centered around a plot or a genre instead of characters. And the genre least dependent on recognizable talent? Science fiction and fantasy.

“I like seeing unknowns cast in comic book roles. They don’t bring a lot of baggage with them,” says Jenelle Riley, National Film & Television Editor for Back Stage magazine.

The Superman films are a good example. Christopher Reeve was an unknown when he was cast in the 1978 film. That gamble paid off big for producers and fans.

When rumors began to swirl about a bigscreen comeback for the franchise, actor Nicolas Cage was said to be interested in playing the Man of Steel.

“I can’t even imagine that,” Riley says. Fans would be so distracted every time they saw Cage in tights, she claims.

Producers decided to cast another unknown, television actor Brandon Routh. 2006's Superman Returns grossed $200 million domestically, but with a reported budget of $270 million the film was viewed as a financial disappointment.

The unknown actor provides a blank slate that allows fans to project whatever they want to see from their comic book favorites, Riley says.