close
With talk of a second installment heating up, we take a look at the track record for sequels to successful R-rated comedies. 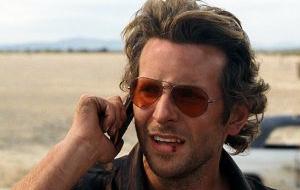 What’s the best way to handle a hangover?

In the case of the successful Warner Bros. comedy The Hangover, which knocked off Pixar’s UP to claim the top spot at this weekend’s box office, the answer is easy: Hangover 2.

The sequel to the R-rated comedy was put in the works even before the film, starring Bradley Cooper, made its theatrical debut. Apparently test screenings of the movie back in April were favorable enough for the studio to ask director Todd Phillips to get cracking on a follow-up.

The film weaves the sordid tale of four buddies who go on a road trip to Las Vegas for a bachelor’s party. Three of the friends wake up the next day with the mother of all hangovers. They have amnesia, a tiger, a broken tooth and a baby, but, unfortunately, no groom.

Various trade paper reports back in April said the studio liked early reaction to the film and its trailer so much that they gave Phillips and screenwriter Scot Armstrong ( Old School, Road Trip ) the green light to pen a sequel.

The weekend’s box office performance made that early call seem like the right move.

"We were well positioned to finish in a solid third place, but the movie just took off. It's a fabulous result for us," says Dan Fellman, president of domestic distribution for Warner Bros.

"We're going to enjoy at least a couple of weeks," says Fellman when asked about where the planned sequel stands. "But certainly with this success we're going to begin talking to Todd to get it done as soon as he can."

Phillips and several of the actors were off in Europe to promote the film and couldn’t be reached for comment. Calls to others involved with the film weren’t immediately returned.

But the movie tracking site Internet Movie Database has a listing for Hangover 2 with a 2011 release date. No other details are posted.

While a sequel seems like a no brainer, making a successful sequel to an R-rated comedy is not necessarily a slam dunk.

A lot depends on casting. In 1999, American Pie introduced moviegoers to a use for fresh pie hitherto unknown to the big screen. That film was a blockbuster, puling in a total of $102.6 million, or $145.6 million adjusted for inflation.

Two sequels were made with the same key cast members and both were quite successful. 2001's American Pie 2 earned $145.1 million domestically, or $184.4 million when adjusted for inflation. American Wedding in 2003 pulled in $104.4 million, or an inflation-adjusted $124.3 million. The franchise has since turned into a straight-to-DVD enterprise.

Caddyshack did not fare as well its second time out.

But Caddyshack 2, released eight years later, did not have Murray, nor was it directed by Harold Ramis, who directed and co-wrote the first film. The sequel earned only $11.8 million domestically. Even after adjusting for inflation, the cumulative take was a paltry $20.6 million.

Sometimes a film just catches lightening in a bottle and resists all attempts to recapture the original formula.

That was the case with the 1982 classic comedy Porky’s, which won moviegoers over with its raunchy humor and earned $113.3 million, or a whopping $271.8 million in today’s dollars.

The studio followed up quickly, releasing Porky’s II: The Next Day the following year. The film only garnered a third of its predecessor, earning $33.8 million domestically, or $77 million in inflation-adjusted dollars.

And Porky’s Revenge in 1985 was a real oinker. That film pulled in $20.5 for its entire domestic theatrical run, or only $41.5 million in today’s dollars.