close
Summit's The Hurt Locker will try to bring the Iraq war to mainstream moviegoers. 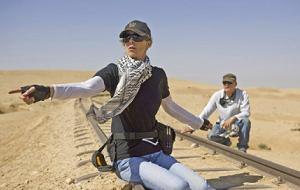 Director Kathryn Bigelow has a short but consistent resume of sly action films featuring strongly developed male characters. K-9: The Widowmaker, Strange Days and the oft spoofed Point Break handled topics like loss, aggression and bravery while also touching on the role male bonds play in these issues. Her newest follows in this tradition but in place of locales like Los Angeles or Venice Beach, our leads are located in a war-zone. The Hurt Locker stars Jeremy Renner as James, the impetuous but expert team leader of an elite, voluntary squad who disarm homemade bombs in domestic Iraq. Scripted by Mark Boal, a journalist embedded in Iraq in Winter 2004, the film goes to lengths to preserve the stories of people upon whom it’s based.

After The Hurt Locker ’s premier at Toronto International Film Festival, the film screened at ShoWest to appreciative crowds. B OXOFFICE was able to catch up with Bigelow to discuss the finer points of her film.

Q: You’ve said the film isn’t a war film but rather a drama that takes place in Iraq, but war is always a divisive subject. How do you feel the film fits within the genres into which it will be placed?

A: Anytime you’re looking at combining entertainment with substance it’s a question of balance, integrity and responsibility—especially with a conflict that’s ongoing. Our real, overriding objective in this film was to keep the reportorial quality of the story authentic and realistic at every junction. Mark (Boal) was on the set and we would put a really high degree of rigor on protecting (the story’s) reality and authenticity, to the point where we shot it in Amman (Jordan). All the extras and bit players are Iraqi. It’s intended to be what Mark calls “true fiction.” I think it’s an opportunity to be responsible and an opportunity to humanize soldiers in this particular conflict, which I think is fairly under-reported.

A: I think its non-partisan. It looks at this conflict and sees the futility in it and [shows] the courage of the men who are going out ten, twelve, fifteen times a day, saving thousands of lives disarming bombs. They work something like 72 hours on, 48 hours off. And once you disarm one bomb, there’s always another out there. It’s brutal and the nature of their particular course of action is episodic, as is our story.

Q; The look of this war has been developed through hand held, low-def digital footage taken by civilians and soldiers in and out of the field. How much thought did you put into how you’d use that aesthetic in the film?

The “you are there” experience. I wanted to put the audience in the eyes of the reporter, who is the invisible eyes through which you’re experiencing this conflict. I wanted to give it that kind of tension, texture and realism. That necessitated a look that was as realistic as possible.

Q: Hurt Locker features some tensions, particularly the tension between bravery and bravado, that seem like a challenge to the film’s neutrality. Jeremy Renner, playing James, is sort of a cowboy who defies domestication—

A: The thing that’s interesting is that Mark has combined and crafted in this character a man who has a reckless nature but a profound skill set. So, is it the reckless nature that keeps him alive? Is it the skill set? It’s very specific to James and you don’t find it in all the characters, just him. So I think it’s a very specific kind of psychology and it’s certainty one he composited from several individuals Mark met in Iraq. That kind of recklessness and bravado protects James. Mark has a quote he gave to the Washington Post I like. He said, “Courage is not the absence of fear, but humor in the face of fear.” This film is an opportunity to look at the men who have, in my opinion, the most dangerous job in the world and see them as heroes and see the price of that heroism—the courage. I want the audience to make their own judgments—their own informed opinions.

The Hurt Locker opens at select locations this Friday.