close
Sacha Baron Cohen's latest film runs the risk of not being interpreted the way that it is intended to be.

'Brüno' in the Mainstream 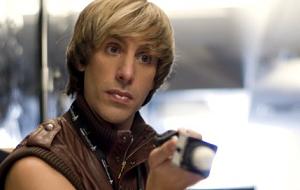 More than two weeks from now, Sacha Baron Cohen will unleash his unique brand of humor on the world once again with Brüno, an R-rated comedy from Universal.

As was the case with Cohen's Borat, Brüno is already being discussed before mainstream moviegoers have had a chance to digest it. While Borat caused controversy because of the way it portrayed the often racist or misogynistic real-life people in the film, Brüno is coming under scrutiny from the gay community. The concern is that audiences may not get the joke the way that they are supposed to.

"Many audience members are going to recognize what Sacha Baron Cohen is doing in this movie and appreciate his satirical take on many stereotypes, which in many scenes in the film is on the mark. However, for other audiences, these stereotypical images won't increase their discomfort with homophobia, but instead decrease their comfort with gay people," says Rashad Robinson, Senior Director of Media Programs at the Gay & Lesbian Alliance Against Defamation.

"Those of us who saw this film agreed that it's not really helpful to try to critique this as a single film," adds Robinson. "It's really a 90-minute series of sketches—some of which hit their mark, but some of which hit our community instead, and in ways that feel fundamentally antithetical to the intentions of the filmmakers."

Robinson also notes that satire is something that needs to be used cautiously.

"Satire is an important tool for calling attention to people's hang-ups, biases and intolerance, and that certainly is the case for satire that targets homophobia," says Robinson. "However, since satire rooted in exaggerated stereotypes can often be interpreted in such drastically different ways by different audiences, it can at times be misinterpreted and end up reinforcing the problematic points of view it's supposedly satirizing."

If Brüno was headed for a small release in arthouse theaters, then the impact it would have on the way mainstream America views the gay community would be less significant. Obviously, that's not the case. Considering that Borat grossed an impressive $128.5 million domestically back in 2006, it's a safe bet that Brüno will at least reach the $100 million plateau, even if it does have people squirming in their seats a little too much.

Universal's marketing blitz has wisely played up the fact that Brüno is from the same person responsible for Borat. The beginning of the theatrical trailer devotes a significant amount of time to the praise that was heaped on Borat before focusing on Brüno.

"It's been a smart roll-out," says Robert Marich, author of Marketing to Moviegoers. "[Universal] kept the lid on things for a while. This is not a film that you need to sell far in advance like Spider-Man 2."

Marich feels that the film's use of MySpace as a promotional tool is still going to be effective, even though the social networking giant has been losing ground to Facebook.

Brüno 's July 10 release date is also an advantage, because it means that Transformers: Revenge of the Fallen will be slowing down and there will still be five days before Harry Potter and the Half-Blood Price, which has a strong appeal among adults, takes over the box office.

As is the case with most summer films, the opening weekend is where Brüno needs to shine the most. The trailers have certainly won over audiences, but whether or not the film itself will manage to play as well as Borat did remains to be seen.