close
After the disappointing opening of Land of the Lost, Will Ferrell needs to chose his next project carefully. 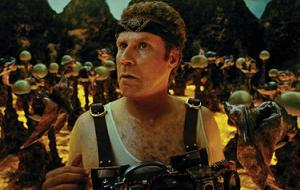 Will Ferrell got transported to an unfamiliar Land last weekend, a place where his movies can only climb to number three on the box office charts.

Is Ferrell Lost, or is his latest comedy clunker merely a blip on an otherwise stellar movie career?

An informal poll on PopEater.com after the release of Land of the Lost asked “Is Will Ferrell in a slump?” The answer? A hefty 68 percent of the 1,274 responders said, “yes.”

When Ferrell tried to stretch beyond his standard comic rhythms, only a fraction of his fans stuck by his side. The quirky Stranger Than Fiction earned $40.4 million domestically.

“Warner Bros. was hoping these now new parents would probably be excited to see Speed Racer and take their kids,” Phillips says.

Universal did some quick movie math and calculated that dinosaurs plus Will Ferrell would all but sell itself.

Lost ’s lackluster showing could also be pinned on the film’s star.

“When comedians get hot ... their shtick gets put out there a little too much,” adds Phillips. “You start seeing these guys in three or four movies a year, and the audience tires of them.”

Ben Stiller suffered from overkill a few years back when he appeared in six movies in 2004 alone.

Ferrell doesn’t have to drop off the map entirely, Phillips suggests. The comic actor can still write projects behind the scenes. Or, he could showcase his comic chops on his comedy web site funnyordie.com.

Even if a surefire hit like Anchorman 2 makes it onto his schedule, he might be wise not to appear in anything before it to make himself feel a bit fresh for today’s audiences, says Phillips.

Dennis Toth, a movie columnist and film financing consultant with New York-based R&R Consulting, doesn’t think Land of the Lost 's failure will hurt Ferrell’s career on its own.

The actor’s resume teams with peaks ( Anchorman ) and valleys ( Bewitched ), “and he still has a pretty strong following,” Toth says.

“He may, however, be advised to go back to something closer to his somewhat edgier roots,” he says, much like his one-man Broadway show, You’re Welcome, America: A Final Night with George W. Bush.

Then again, a talent like Ferrell may ultimately find his strongest roles as part of an ensemble.

“He is best when bouncing off the script and the cast, and not actually leading it,” Toth says.