close
Will the planned adaptation of Where's Waldo? be the next Rocky and Bullwinkle or the next Alvin and the Chipmunks? 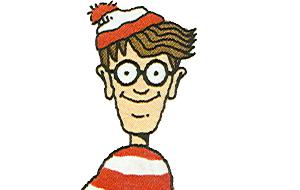 Last week’s announcement that Universal Studios would bring the popular kid’s series, Where’s Waldo to the big screen left many scratching their heads and asking: What’s next?

Could a flick about Bazooka Joe, the eye-patch wearing bubble-gum chewing jokester or even a Hollywood version of the board game Monopoly be far behind?

Brace yourself: Both projects are in various stages of development and could soon join such other questionable adaptations as Clue, Alvin and the Chipmunks and Rocky and Bullwinkle.

“I’m starting to get a little worried that we’ve run out of ideas,” says Jenelle Riley, National Film & Television Editor for Back Stage magazine.

A movie based on Waldo has been in the works for years. Nickelodeon and Paramount reportedly were considering a script where a 30-year-old Waldo, still wearing his red-and white-striped shirt, glasses and walking stick, traveled through time thanks to a glitchy time machine.

When that version went nowhere, Universal picked up the rights.

Universal also is developing a movie based on the Parker Bros. board game Monopoly with Ridley Scott supposedly signed to direct.

Making films based on board games, children’s books, cartoons and even theme park rides is always a roll of the dice.

Some have gone directly to jail, like the 1994 film Clue, which starred Tim Curry and Christopher Lloyd. The movie made a mere $13.9 million at the domestic box office—$28 million when adjusted for inflation. Similarly, the 2000 theatrical version of The Adventures of Rocky and Bullwinkle, with Robert De Niro and Rene Russo, made a paltry $26 million—$34.6 million adjusted.

Others have passed GO and collected millions of dollars, like 2007’s Alvin and the Chipmunks, starring Jason Lee, which grossed a whopping $217.3 million—$226.8 million adjusted. Even the 2004 film Garfield, voiced by Bill Murray, made $75.4 million—$87.1 million adjusted.

The biggest success in this genre arguably was Disney’s Pirates of the Caribbean, which spawned a billion-dollar trilogy.

Why do studios reach for even the most obscure characters instead of offering more original fare?

It’s considered a safer bet because Waldo and games such as Clue and Monopoly have built-in fan bases that studios assume will limit the downside risk of such projects.

“The fact that it already exists means it’s pre-sold,” said David Fain, an adjunct professor at USC. “There’s at least a segment of the population that already knows what it is.”

The problem is when studios try to capitalize on a well-known name or character, but take it in a direction that alienates hard-core fans. That risk is even greater when taking an animated character, such as Underdog or Waldo, and turning it into a live-action film, Fain says.

Filmmakers might have better luck with a character such as Waldo, which really has no plot attached to it, rather than trying to stay faithful to audience expectations for a more established character, such as Popeye.

“As far as the concept goes, Waldo is a guy with a striped shirt, glasses and a hat in a crowd,” Fain says. “From there, you can go anywhere.”

Of course, the biggest factor influencing studios to look far and wide for new characters is money.

“Enough of these movies are doing well to make this happen,” Riley says.

And, as the saying goes, even a broken clock is right twice a day.

“Every time I think about picking on one of these movies, I think about how well Pirates of the Caribbean turned out,” Riley says.