close
The Greek community reacts to My Life in Ruins, the new film from My Big Fat Greek Wedding star Nia Vardalos. 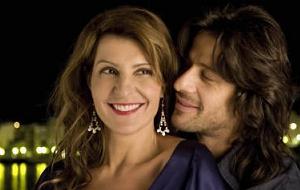 Nia Vardalos only has one hit film to her credit—the sleeper comedy My Big Fat Greek Wedding. But she remains among the most prominent Greek actors in Hollywood.

This week, Vardalos returns to the big screen in

It’s a sloppy wet kiss to her homeland, a lightweight comedy showing off some of the country’s most attractive vistas and historical sites.

The movie may not vault her back to the top, given the bruising competition at the box office this weekend, but her impact isn’t lost on her fellow Greeks.

“Nia Vardalos has been a very positive force for the Greeks. Greek cinema and stories seemed obscure right before her success,” says Ersi Danou, director of programming with the Los Angeles Greek Film Festival, “Her success has brought Greece back on the map.”

Not every Hollywood actor gets the Greek experience right. Danou applauds Anthony Quinn’s performance in 1964’s Zorba the Greek, a film referenced in the new Ruins. But Colin Farrell lost something in the translation, Danou says, with 2004’s Alexander, director Oliver Stone’s disastrous biopic.

Hollywood has been visited Greece both past and present ever since cameras first started rolling, according to Danou. The results are usually mixed.

“Greek characters are often portrayed in a stereotypical way, a way that is familiar to the American perception of the Greek culture,” he says.

Nick Larigakis, executive director of the American Hellenic Institute, says Hollywood has “fundamentally” treated Greeks well on screen. Even if studios occasionally lean on the sappier side of the culture, citing the 1982 film Summer Lovers.

“At the end of the day it’s a comedy, and you have to be over the top to be funny,” he says.

Any film that shows Greece in a positive light is a boon for the country’s tourism industry, says Larigakis, who has a home on the Greek island where Mamma Mia was shot.

“The Mamma Mia movie put tourism on the map,“ he says, adding that part of the country that wasn‘t a primary tourist destination before the film hit theaters.

His only complaint regarding recent Greek films comes down to timing. Mamma Mia ’s late summer release date last year, and the June schedule for Ruins, make scheduling a trip to Greece much more difficult.

“Many people already made their plans for the summer,” he says, and he wonders if the film's DVD releases will spark tourism like their theatrical showcases often do.

Vardalos is not an A-lister in Hollywood circles but that hardly matters to her fellow Greeks, Larigakis says. A film like Ruins will restore her position in Greek circles.

“This will put her right back on center stage,” he says.