close
The proposed union between Paramount and Sony made us wonder what could happen if other studios followed suit. 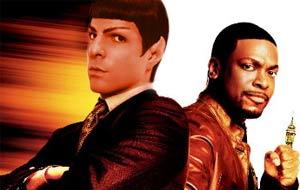 Hollywood could be rocked this summer by the merger of two major film studios.

Forbes.com reported this week that Paramount is considering a plan to merge with Sony Pictures, Universal or perhaps another studio.

The impact on the industry would be significant, but it also could open some intriguing options for a business obsessed with franchises. If other studios were to follow suit, even the stodgiest sequels could get a boost by cross pollinating with other, equally successful movie properties.

Just think of the possibilities …

Twilight (Summit) meets Hannah Montana (Disney): Poor Miley Cyrus doesn’t feel like every other kid on the block. Her musical fame and fortune as Hannah Montana has left her isolated from her peer group.

But matters take a turn for the worse when Miley falls in love with a dreamy vampire named Edward. All she wants to do now is hang out with Edward and run her fingers through his gravity defying locks. Competition ensues between her and Kristen Stewart.

Back to the Future (Universal) meets Indiana Jones (Paramount): Professor Jones has married his on-again, off-again galpal Marion, but wedded bliss isn’t in the cards. Fortunately, Indy runs into a wacky Doc Brown who promises to send him back to the late 1930s so he can break up with Marion once and for all.

But the plan goes awry when Indy’s whip gets caught in the DeLorean’s steering wheel, sending him back not to the 1930s but to the dawn of World War I.

Saw (Lionsgate) meets The Dark Knight (Warner Bros.): Batman has rid Gotham City of the Joker, but in his newest adventure he finds himself trapped in an abandoned warehouse without his trusty utility belt. A voice enters the bleak space. It’s a madman who calls himself Jigsaw, and he wants Batman to pay for the way he’s been fighting crime.

We learn Jigsaw and the Joker broke out of a mental institution together years earlier, and now Jigsaw wants revenge against Batman for not caring enough about his old pal’s delicate mental condition.

“He was laughing on the outside but crying on the inside,” Jigsaw wails as he chains the Caped Crusader to the warehouse floor.

James Bond (MGM) meets The Hangover (Warner Bros.): The suave, sophisticated 007 drank too many shaken, not stirred martinis and passes out. He wakes up the next day to find a dead German spy in his bed, a lion in his bathroom and a husky man with a beard screaming at the top of his lungs.

Bond must use all of his super-spy talents to figure out what happened last night before M revokes his license to kill.

Carter can’t understand the words coming out of his new partner’s mouth. But Officer Spock’s curious vocabulary hides the real truth behind him joining the force. Spock time traveled back to 2009 to save a species of whales from extinction.

The Triad gang is trying to smuggle weapons and drugs in the stomachs of these whales to get around the U.S. Coast Guard’s enforcement efforts. And it’s up to Carter and Spock to break the crime ring, all the while Spock’s shipmates are in a battle of their own against a Romulan vessel which has all but decimated the Enterprise’s warp drive.