close
The recent internet buzz about G.I. Joe: The Rise of Cobra may be a lot of smoke and no fire.

Much Ado About 'Joe' 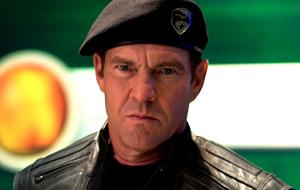 As if the big screen adventures of G.I. Joe and his elite team of soldiers wasn’t drama enough, a behind-the-lens power struggle between the studio and the film’s director that could scuttle its box office potential may be happening.

Then again, it may not. This is Hollywood and rumors are as common as sunny days and in the end, nothing matters except bodies in theater seats on opening weekend, which isn’t until August 7.

Rumors began to hit the Internet last week that the film’s director, Stephen Sommers, had been fired after a test screening of G.I Joe: The Rise of Cobra resulted in the lowest test scores in the history of Paramount Pictures. Sommers, the successful writer and director of such films as The Mummy and Van Helsing, had been locked out of the editing room, according to one Web post, not allowed to touch even a single frame of film.

"It’s very unfair to Steve, it’s completely untrue he was never asked to leave or been fired or any of that,” the producer told the web site Latino Review. “That’s ridiculous. The movie tested very well."

The rumor also was that Paramount had brought in director and film editor Stuart Baird to take over post production and whip the film into shape. Representatives of Baird and Sommers did not respond to requests for comment.

The rumor grew over the course of last week until it collapsed under its own weight. Even the original website—which belongs to producer Don Murphy—where the story first appeared has since taken it down.

Hollywood trade paper Variety reported that Sommers has a contract with the studio giving him final cut, an industry term that means he alone can make the edits to the version that eventually makes it way into theaters.

Paramount itself is downplaying the rumors. Studio spokeswoman Patty Rockenwagner declined to give a formal statement, but sent along di Bonaventura’s comments.

It’s not unusual for there to be tensions between a studio and a director. It’s even not unheard of for directors to be replaced, even after large chunks of a film have been made.

Gone with the Wind essentially had four directors. Original director George Cukor was replaced by Victor Fleming about half-way through filming. Fleming was shooting The Wizard of Oz down the street for MGM when he was hired by producer David O. Selznick to rescue his Civil War Film.

Paramount famously hired a second director to shadow Francis Ford Coppola as he shot The Godfather. The second director was ready to take over the picture as soon as the studios lost confidence in the young Coppola. Thankfully, that never happened.

So why the rumors?

Paramount has a lot riding on this film. It’s the first big-screen adaptation of the iconic toy soldier from Hasbro. If it does well, G.I. Joe could become a lucrative franchise for the studio, generating billions of dollars the way other franchise films, such as Transformers and Star Trek have.

And the film has been delayed a bit, although the producer says it’s not because of any disagreements between the studio and the director.

“We had a delay on visual effects so we waited a long time to finish the movie but that’s the only thing,” di Bonaventure said. “I don’t really know why that would be interpreting it negatively but I guess it was."