close
James Cameron's Avatar opens this December, yet the marketing blitz hasn't even begun. Will the film succeed? 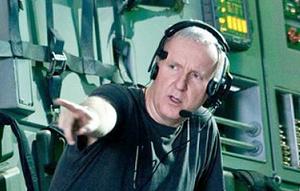 Less than six months from now, one of the most highly-anticipated films in years will hit theaters - the 3D movie Avatar, from Aliens director James Cameron.

But you’d hardly know it from the complete lack of marketing in theaters, on television or in print.

Twentieth Century Fox and Cameron have been oddly silent in a world where hype is the main currency. The director recently showed 24 minutes of footage to a trade show crowd in Amsterdam, the first glimpse of the film Cameron announced he was working on as far back as 1996.

The film is slated to open December 18. But experts say the lack of advertising for the movie won’t hurt. In fact, it may even be part of the strategy to keep a lid on the movie as long as possible.

“Does a film need to be pushed ad nauseum in the months in-between? I'd argue that it does not,” says Bryan Laurel, director of marketing for the Harkins Theater chain, based in Arizona. “There's a risk of turning people off if they have seen six versions of a trailer over the course of six months. They feel like they have already seen the film by the time opening day arrives.”

Many big-budget films start as early as a year in advance to build “buzz” among moviegoers—often before a single frame of the film has been shot.

The teaser trailer for The Da Vinci Code was released in May 2005. The snippet showed a camera flying through what appeared to be deep stone crevices that, when the camera pulled back, were revealed to be tiny cracks in the Mona Lisa, the Leonardo Da Vinci masterpiece that plays a key role in the book and the movie.

The film was released in May 2006 and was a smash hit, despite of, or perhaps because of, the early marketing push.

But Avatar is no ordinary film. It is being filmed using 3D cameras designed by Cameron himself, making it one of the first live-action films to be shot in 3D in years. Other technological innovations, including new forms of motion capture, are said to make the sci fi movie a stunning visual feast.

With such emphasis on the visual experience, making a compelling TV spot or poster has its challenges.

“It’s probably a tricky movie to sell,” says Jonathan Taplin, a professor at the Annenberg School of Communication at the University of Southern California. “It’s tricky to make a trailer with the full 3D effect.”

That kind of challenge, or Cameron’s well-known perfectionism, could lie behind the lack of a trailer. One report said Cameron has already vetoed eight trailers as he tries to find the best way to get his story across to moviegoers as well as the message that this film’s special effects are second to none.

Still, no one is worried that Cameron and Fox will have trouble drumming up business for the film.

“It’s got a lot of following in the sci fi geekdom,” Taplin says. “It’s probably best to hold back as long as you can or else it becomes ho hum.”

Taplin suggests that six weeks before a film’s opening is plenty of time to create anticipation among audiences. That’s a view shared by at least one theater chain.

“If marketing materials for Avatar make their way into theatres towards the end of the summer that's still four months of promotion for the film,” Laurel says. “If anything, Fox and James Cameron are creating that ‘must see’ factor that all studios and directors pray for every time they release a film. There's no need to panic. Something tells me Fox, Cameron and every exhibitor is going to be all right once December 18th rolls around.”