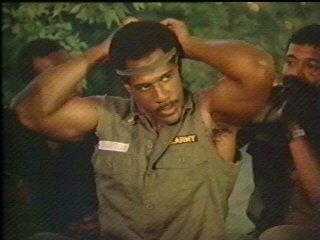 You know, there are cultural tragedies and then there are Cultural Tragedies. And among the latter, I am shocked to discover that there is no currently available DVD of the 1990 shoot-em-up classic Street Hunter, co-starring and co-written by my old college bud, the late great Steve James .

Rightly dubbed The King of the B-Action Film by The Phantom of the Movies® , Steve had a pretty amazing career. Mostly he worked in lower budget flicks where things had a tendency to blow up pretty good -- basically, if it starred Michael Dudikoff and had a colon and a roman numeral in the title, Steve was in it. But he also had a memorably scary turn in William Friedkin 's brilliant To Live and Die in L.A., and in the 1986 The Delta Force, he was co-billed with Chuck Norris , Shelley Winters AND Fassbinder stock company star Hannah Schygulla , a feat few actors could boast. Steve was such an icon, in fact, that he got to be the next to last celebrity cameo in Altman's The Player ; in the film within the film at the end, he plays the prison guard who gets the phone call that Julia Roberts ' execution has been stayed after the poison gas has already been released. Steve's big line: "What?!?!?!?!?"

Here's a little compilation of his best scenes, put together by one of his many fans.

And here he is in Street Hunter, with co-star John Leguizamo .

I ran into Steve for the last time in 1991, when he was getting ready to shoot McBain , one of the many films Christopher Walken made in the 90s like other people smoked cigarettes -- compulsively, one after another. We reminisced for a while, and when we parted, I told him I was going to write a little tribute in the video magazine I was toiling for at the time. "Make sure you mention Street Hunter," he said. "With me doing my Lee Van Cleef thing."

Which I did, and after it ran -- including a great picture of him in a particularly Van Cleef-ish outfit -- I got a message on my answering machine.

It was Steve, in his inimitable macho tones.

That was the last time I heard from him. He died unexpectedly in late 1993, right before the premiere of M.A.N.T.I.S, a sci-fi pilot he did for the Fox Network. Sidney Poitier spoke at his memorial service.

In any case, as I mentioned up top, there's no DVD of Steve's masterpiece, but you can still find a VHS copy of Street Hunter here . You can also pre-order the Friedkin-supervised Blu-ray upgrade of Steve in To Live and Die in L.A. here .