close
After the success of The Hangover, a handful of other R-rated flicks will try to dominate the summer movie season. 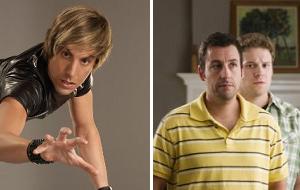 The characters in the hit R-rated comedy The Hangover can’t recall what they did the night before, but Hollywood will surely remember the raunchy comedy as the season’s sleeper smash.

It would appear to defy demographic logic to release an R-rated movie during the summer, a time when movie-loving teens and families are swarming theaters.

But R-rated comedies are the newest summer staple, from Wedding Crashers in 2005 to 2007’s Superbad.

Universal is set to test the wisdom behind releasing R-rated movies in the sweltering summer months. The studio will unveil three major R-rated films next month—Sacha Baron Cohen’s Borat follow-up Brüno, director Michael Mann’s bank robber flick Public Enemies and Funny People from Judd Apatow and Adam Sandler. It's a risky move on the part of Universal, and they'll need the films to deliver even more after the recent crash-and-burn performance of Land of the Lost. Whether or not any of those films will be able to grab Hangover -style numbers remains to be seen.

Also opening in July is Sony's The Ugly Truth with Katherine Heigl and Gerard Butler. The R-rated romantic comedy will need to rely heavily on date crowds that are of age.

Dale Hurst, director of marketing at Carmike Cinemas, says today’s audiences are itching for a release from the punishing news headlines. That’s why a comedy is such a good fit for their ticket buying dollars, even if the jokes in question comes with a few parental warnings.

“ The Hangover has what people are looking for,” says Hurst, adding that the sharp marketing campaign for the film sealed the deal with audiences.

Action films slapped with a restricted rating are another matter, he says.

“You’ve got death and destruction and things blowing up. There’s no market for that when families are doing things together,” he says.

“And The Hangover fit’s the bill,” Medved says. “You could see it in the advanced ticket sales. Clearly, the preview screenings really helped generate interest.“

R-rated films will always alienate a section of the movie going audience, but the films do offer a level of expectation that some PG-13 films can’t match.

Medved says some Fandango.com users have been frustrated with a number of PG-13 films, like Land of the Lost, which feature content unsuitable to young children.

“There were so many upset parents with Land of the Lost,” he says. “People were surprised by the amount of violence, sexual innuendo and language you can find in a PG-13 film.”

“There’s something wonderfully refreshing about an R-rated comedy that you know what you’re gonna get,“ adds Medved.

Today’s R-rated features have an advantage over similar films from the past. Red band trailers can stoke interest in these films, as can boisterous pre-opening screenings.

That approach targets the Internet via viral campaigns and social outlets like Facebook.com, Devine says. Word of mouth—or in some cases word of text message— can do the rest.

The Hangover and Brüno also adhere to a policy that even PG movies should consider—frugal filmmaking.

“Keeping a budget low and having a good script never go out of style,” he says.