close
The Hangover's popularity will cause moviegoers to debate the best way to avoid paying for a night of fun. 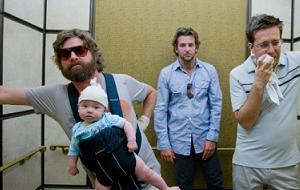 How do you cure a hangover?

That’s easy—take some of the hair of the dog that bit you, whatever that means.

Or ginger. Right. Ginger cures everything.

No, wait. Vitamin C! Lots and lots of vitamin C! And a big Irish breakfast to soak up all the alcohol. And a tall glass of coconut milk. And then a Bloody Mary with a raw egg in it. That’ll do the trick.

Good God, all these cures are making me sick!

Now that The Hangover is well on its way to becoming the biggest comedy hit of the summer, the legendary debate about what the best way to avoid paying the price for a night of fun is bound to resume as people exit movie theatres across the country.

Unfortunately, the truth may be hard to swallow.

“There is no scientific evidence to support any cure or any prevention other than to avoid alcohol.”

That spoilsport pronouncement is from Rachel C. Vreeman, assistant professor of pediatrics in the Children’s Health Services Research Program at the Indiana University School of Medicine.

Vreeman, along with fellow professor Aaron E. Carroll, is the author of Don’t Swallow Your Gum: Myths, Half-Truths and Outright Lies About Your Body and Health.

The book debunks a number of popular beliefs, including the need to drink eight glasses of water per day (not necessary), men with big feet have, well, other big things (nope), and food dropped on the floor remains germ free if you get to it quickly (there is no five-second rule - not even one-second. Sorry).

Some well-loved “cures,” such as aspirin and black coffee can help with some of the symptoms. Caffeine eases fatigue and aspirin can dampen a headache.

Pharmaceutical companies have tested just about every drug they make to see if it could be marketed to cure hangovers, Vreeman says. Blood pressure medication as well as drugs that ease nausea and vomiting in patients receiving chemotherapy have all been tested. But so far, nothing helps ease the pain of alcohol overconsumption.

The worst cure is probably more alcohol consumption, otherwise known as the hair of the dog that bit you. Got drunk on vodka? Drink some vodka in the morning. Was it whiskey that defeated you last night? Have a nice single malt Scotch this morning.

That cure makes no sense, Vreeman says. When alcohol is broken down by the liver, it releases chemicals into the blood that the body sees as toxic. Drinking more alcohol just release more toxins.

And if you’re wondering what dogs have to do with a good buzz, well, the phrase goes back to Roman times, according to the Morris Dictionary of Word and Phrase Origins.

The Romans believed that the cure for a dog bite was the burned hair of the dog that bit you. That belief led to the phrase Similia similibus curantur, or “Like things cure like.”
If there’s nothing you can do to ease the pain on the inside, at least you don’t have to look so bad.

Cosmetics company Shenui sells something called “Hangover Pep Serum.” The concoction of soy rice peptides and blackberry leaf extract is supposed to reduce puffiness around the eyes, boost the skin’s oxygen content and tone the skin. Just buying the product could help. Spending $46.50 for one ounce of the serum automatically reduces the amount of money available to spend on apple martinis.

Of course, no supposed “cure” can do anything for the biggest hangover symptom—regret.

Comedian and talk show host Jimmy Fallon recently tweeted his method for overcoming that one: “I used to drink Gatorade and try to cry.”