close
Leonardo DiCaprio's proposed project about the world of online casinos could mean a lot to an industry in turmoil. 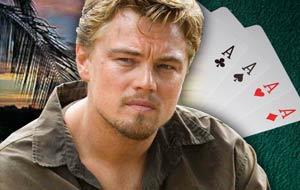 Much has changed in the world of poker since Steve McQueen famously sat down at a card table to play Edward G. Robinson in The Cincinnati Kid.

Long ago poker was an activity relegated to smoke-filled rooms in locales with questionable morality, but the game has since crossed over into the mainstream in a big way.

The story of how poker became even more popular is practically the stuff of legend. In 2003, an accountant named Chris Moneymaker forked over $39 to play in an online poker tournament, which he won. The prize was free admission to The World Series of Poker in Las Vegas. Moneymaker then won that event and the $2.5 million prize that came with it.

After Moneymaker's victory, the world of online poker exploded and interest in Texas Hold 'Em reached epic proportions. Websites such as PokerStars, Full Tilt and Party Poker helped turn online poker into a billion dollar industry, which in turn created a trickle-down effect throughout the entire gaming industry.

In October 2006, George W. Bush passed the Safe Port Act, which came with a section titled the Unlawful Internet Gambling Enforcement Act. Essentially, the UIGEA seriously hindered the growth of online poker and made it increasingly difficult for citizens of the United States to play online poker by placing restrictions on financial institutions patrons would use to fund online play.

As is the case with increased interest in any subject, Hollywood has tried to tap into poker. Unfortunately, Tinseltown's efforts have been met with little financial success.

Around the time of Moneymaker's historic win, acclaimed director Curtis Hanson ( L.A. Confidential ) began work on Lucky You, a story about a professional gambler set against the World Series of Poker. The film turned out to be a disaster. Its release date was changed several times, and when it finally hit theatres in April 2007 it was universally panned by critics—bad poker metaphors were out in full force—and audiences alike. The Warner Bros. release managed only $5.8 million domestically.

Yet even after such a high-profile dud, Hollywood is not done with the world of poker. Earlier this week, Leonardo DiCaprio announced plans to make a film about the online casino industry in Costa Rica. The untitled project is being written by Brian Koppelman and David Levien, the scribes behind Rounders, one of the most revered poker movies of all time. While Rounders didn't break any box office records—the Miramax release recorded a modest $22.8 million domestic haul, which equates to around $35 million when adjusted for inflation—it has built a large cult following on DVD.

With the current stigma surrounding online poker, a valid concern for the gaming community is whether or not DiCaprio's project will take a biased approach and continue to pollute public opinion.

"I believe that taking a negative approach is an easy way to sell tickets," says Eric Morris, Co-President and Publisher of Bluff Magazine, the nation's leading poker publication. "The obvious script would go something like, 'rich kids start online poker room, start to make money and then rig the site so they profit even more with the conclusion being that they get caught and go bust.' However, if the writers fairly portray the true facts of operating an online poker room it could do quite a good job of backing up what all poker players want to see and that is regulation and the amendment of the UIGEA."

"Online poker operators have worked quite hard to get rid of the negative stigma attached to online gaming and with audits and random card generators there is very little room for corruption," adds Morris.

Bill Murphy, President and CEO of Blufirepoker.com, a poker training site that teaches people to make an income from online poker, is glad that the team behind Rounders is working on this latest project.

"I was always surprised there was never a follow-up to Rounders," says Murphy.

Murphy is quick to note that the world of online poker has received a negative reputation because most people just don't understand the game itself.

"The biggest misconception about poker is that it's luck," says Murphy. "Short term there will be luck, but long term the skilled players make all the money. Online this is magnified even more since so many more hands can be played in a shorter time period, players see more bad beats and assume they are unlucky and/or online is rigged."

While the world of online poker is in a state of uncertainty, Hollywood may have finally found a way to properly monetize poker thanks to the involvement of a major star. Whether or not it will change the public opinion about playing on the virtual felt remains to be seen.