close
Kevin Tancharoen, the director of the upcoming Fame remake, discusses his own trip to the top.

A New Take on 'Fame' 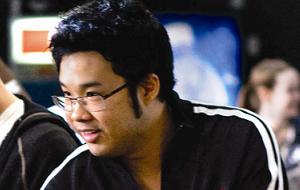 Kevin Tancharoen always wanted to make it big. But the difference between him and other dreamers is he made it happen—and shockingly fast. Before he could drive, he traveled the country as a touring dancer. At 19, he choreographed Michael Jackson's 45th birthday spectacular. That same year, he directed Britney Spears' Onyx Hotel tour, and at 20, MTV signed him to direct a TV series called DanceLife. So while it seems astounding that Tancharoen is helming his first feature film at at age when most would-be directors are on-set fetching coffees, for people who've followed his incredible trajectory, his career move is happening right on time—and here, he tells B OXOFFICE what other dreamers can learn from his ascent.


What did the first Fame mean to you when you were growing up?

I loved the first Fame very much. I love musicals, but I've always been a fan of a different kind of musical: All That Jazz, Saturday Night Fever. I love all of the Gene Kelly stuff, but I always responded more tonally to the grittier dramas with musical influences in them. Fame was really up there in creating this musical hybrid which I thought was brilliant. It wasn't looking at the camera and starting to sing about the plot of a movie—all of the music elements were integrated into a very real, very organic storyline. When I watched the movie for the first time, I was blown about by how seamlessly they blur that line between the musical world and the real world. I also felt it was one of the few honest teen moves that was very bold and tackled some of the bigger issues that were taboo and risky at the time. I thought it was fantastic—I really learned a lot from it. The TV show I thought was very entertaining. It took a different direction and made things a little lighter and more fun. I'm a big fan of both of them because they have the same core intention, but a different path.

Do you feel like you lived through the Fame experience yourself?

I've grown up in the dance world and used to take singing classes and even tried acting for a little bit. Went to the auditions and was part of a dance company where—it's quite the coincidence—the girl who was the choreographer and ran the company actually choreographed this movie for me. We've had a long relationship, and it's been a great one. I really do feel as if I lived this because I left high school to go on tour when I was 15. I very much grew up in the business, so this is close to home.

What truths did you want to come across about the world of young performers?

I think that nowadays the word 'fame' and the urge or drive to be famous has such a muddled perception. With the reality show competitions and even the internet and YouTube, you have people like Chris Crocker [of the 'Leave Britney Alone' meltdown] and Perez Hilton. People who make sex tapes get famous instantly. Fifteen minutes of fame is irrelevant because it's so tangible. You can just go out there and get it. And it doesn't mean that you have talent when you get that 15 minutes of fame. You did something crazy and in the moment and you got a bunch of YouTube hits and everyone knows you. What I want to come across in this film is the old school mentality which is if you want to make it and last in this business, it's going to take a lot of hard work. You can't mess around. You have to be focused and your passion has to be your number one. I really wanted to showcase that because people with real talent work hard to get where they want to be. A get-rich-quick, fast-paced thing doesn't last. So focus on the work, not the partying. Get in the real spotlight, not the quick one.

I'm glad you brought that up—I wanted to ask you if too many people want to be famous.

The technology today is just so quick. I mean this Twitter thing—I can't keep up anymore. That was one of the main points the filmmakers and I really wanted to showcase. We wanted to make sure the point comes across because kids are being imprinted and modeled with all of the entertainment we put out there nowadays and it's really weird.

How did directing Britney Spears' Onyx Hotel tour prepare you for directing your first movie?

Everything is really choreography from staging a scene to creating a dance number. It's telling people where to go and when to move their arms and say a line. That all translated to choreography. I think the biggest thing I took from the tour is I was able to hone my preparation skills. When you're doing a live tour and you press the go button and people get on stage, you can't press stop and reset. You're going. So if you're not prepared, someone's going to break their arm or fall off a banister. You have to be so prepared—everything has to be down to a science. I feel like working on a live stage show has prepared my nerves and trained me to look at everything that could go wrong. When I step on set, it's more relaxing because I can say 'Cut,' if they mess up. In a live show, there is no cut -- there's no stopping.

Given all the people you've worked with, are people going to be looking for parallels in the characters you've helped create -- thinking that Kherrington Payne is Britney Spears or Christina Aguilera?

I don't think so. What I ended up doing is going to a bunch of art schools and interviewing kids in all the different forms and asking them what their obstacles were and what their story was. I just wanted to make it as authentic as possible—none of these characters are actually parallels to my real life. I've met all these characters, but I can't say that Kherrington Payne is my best friend when I was 15 and we went on tour together.

What's your response to people who say the musical is dead?

I would say to them, 'Have you been living under a rock?' If you look at the marketplace right now, it's all singing and dancing. High School Musical to So You Think You Can Dance? to Dancing With the Stars to Hairspray. Nine is about to come out. It's all over—it's literally everywhere. But the thing that's really great about Fame is I know people first think of it as a musical, but it's really not. It's very much a hybrid—nobody ever breaks out into song in the movie, the performances are integrated and happen within the context of the story at the school. There are no break-out-into-song moments.

How does it compare to other recent teen dancing movies?

We definitely tried to make a grittier movie. A little more raw, a little more authentic. We don't focus on the spectacle of the performance; we focus on the preparation that goes into the spectacle of the performance. Instead of just focusing on what happens in front of the red curtain, we go backstage. A lot of these movies for teens also really focus on hip-hop dancing. That's fun, but in movie we focus on everything. There's tap, there's ballet, modern, jazz, African and there's hip-hop. If you look at the curriculum of any of these schools, they don't teach hip-hop. Students do that on their own time. We dive into the classical nature of musicians. It's not just rock, it's Beethoven and Bach and Chopin. All these classics that people don't focus on anymore because this new generation of teen movies is moving towards hipper music.

From your boots-on-the-ground experience, what do you think is the difference in people who become stars?

Here's the big difference to me. I like to say the line: 'I've always been more in love with the work than the lifestyle.' They're two completely different things. You can go to any club in LA and see a bunch of guys in their True Religion jeans and Ed Hardy shirts. They go to the club every single night and during the day, they don't do anything. They don't even go to auditions—they basically don't even have a job. And the same thing with some of the girls. Those are the people I think are more into the lifestyle than the work, and as soon as you do that, it isn't going to last. A case in point is Lindsay Lohan. You have to get focused on your work. If you lose sight of that and get really into the red carpets and the parties and the gifts and the premieres, then the reason why you got there is completely lost. That's what makes the different. Someone who is focused and knows what they want, they don't go out and buy the bottles at the big clubs and get into the image. Which is simply that: An image.

No one is teaching future stars the practical life skills to stay on top.

Sometimes the only way you can learn is from your own consequences. Getting there and screwing up and refocusing yourself. There's some people who just have that discipline. I have it just because I've grown up in this environment and have been able to be taught by people who have maybe made those kinds of mistakes. I didn't feel the need to go out there and pop bottles. It's different for every person. A lot of artists are eccentric and feel like they need to be that character who might have a drinking habit or a very weird trait. They think that's what makes them creative. And that's not true. Until they come to their own conclusion, it's up to the people who have lived this life and had some success to deliver the message to the future.

I have a movie set up right now at Universal. Brett Ratner is producing and we're just working on the script.