close
(500) Days of Summer, an unconventional love story, is gaining a following in the shadow of blockbusters. 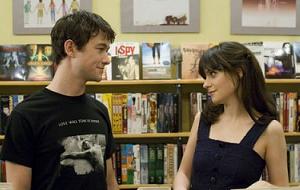 After posting an incredibly strong opening weekend haul of $834,501 from only 27 locations, it looks as though Fox Searchlight's (500) Days of Summer is on pace to join the likes of The Hurt Locker and Moon as one of the summer's biggest indie hits.

Summer could be called the antithesis of the kind of Hollywood love story where the audience discovers that the leading male and the leading female were destined to fall in love. In Summer, Tom, played by Joseph Gordon-Levitt, learns the cold, hard truth that his love for an intoxicating, aloof girl named Summer (Zooey Deschanel) was not exactly written in the stars.

Tom and Summer fall in love to the sound of The Smiths and other quirky musical choices, and the entire film relies on references to pop culture in order to land some crucial emotional moments. It's no surprise that screenwriters Scott Neustadter and Michael H. Weber list the films of Cameron Crowe as one of their reference points for Summer. After all, Crowe is a notorious pop-culture junkie who is responsible for some of the greatest pop music-meets-film moments of all time such as a rejected John Cusack playing "In Your Eyes" by Peter Gabriel in Say Anything... or Tom Cruise belting out Tom Petty's "Free Fallin'" in Jerry Maguire. The screenwriting duo also digested the work of Woody Allen, a writer/director who isn't afraid to deal with the bittersweet nature of relationships.

"I always joke that I got into screenwriting because I wanted to become a music supervisor," says Neustader.

Thanks in part to the way that Summer uses music, the film has an emotional resonance that is curiously absent from a lot of blockbuster romantic comedies.

"We wanted to tell a relationship story that came from a real place and that ran counter to the way that Hollywood has been making these kinds of movies," says Neustadter.

In addition to putting music to great use, Summer also references such classic films as The Graduate and the original Star Wars trilogy. A direct reference to the suave nature of Han Solo during one the film's more cheerful moments is bound to stick with viewers.

"We initially had it down as Paul Newman," says Neustadter when asked about the comedic moment. "Unfortunately for the world, he passed that year and it wasn't going to work, and we weren't going to use it for several reasons."

The strong musical influence doesn't end with Neustadter and Weber. Summer marks the directorial debut of Marc Webb, a music video director whose credits includes videos for Green Day and 3 Doors Down.

Webb follows in the footsteps of other music video directors such as Spike Jonze, Michel Gondry and Francis Lawrence, who successfully made the transition to features. Webb used to share an office next to Lawrence and he still remembers the stories that the director told after working on Constantine and I Am Legend. Although for the most part, Webb says that he had to carve out his own path.

Even though Summer has little in common with them, Webb watched Empire of the Sun and The Natural before deciding how he wanted to shoot his film.

"They are very controlled color pallet movies, and they had a design that I liked," says Webb of the two films. The director also paid close attention to Annie Hall and High Fidelity, two films that play with reality much like Summer does.

Webb also made sure that he didn't let the visual nature of music videos overtake the need to tell a feature-length story.

"Our rule was that we just wanted anything that was visual to come out of a real place," says Webb. "I tried really hard to think about characters and not make it about cool shots."

(500) Days of Summer is now playing at select locations.